Though Las Vegas has become a hotspot for COVID-19 in recent weeks, the National Association of Theater Owners tells TheWrap that there are no plans to cancel next month’s CinemaCon.

The annual trade show for movie theater owners, where top Hollywood studios show off exclusive trailers and footage is set to be held at Caesar’s Palace from August 23-26. But thanks to the more infectious Delta variant, the test positivity rate in Clark County has risen this week to 13.5%, more than triple the annual low of 3.4% in mid-May. Daily cases have risen above 600, the highest seen since early February.

In response to the rising cases, Clark County officials have reinstated requirements for employees to wear masks but stopped short of a mask mandate for tourists as resorts and businesses will only be required to have signs advising mask wearing. The theater owners association is going further, requiring CinemaCon attendees to present proof of vaccination or a negative COVID test taken within 48 hours prior to the event in order to be admitted. 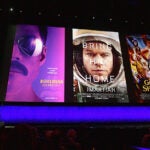 CinemaCon is one of several business and entertainment events being held in Las Vegas in August, all of which serve as the lifeblood of the local economy. The weekend prior to CinemaCon, WWE will be holding its annual Summerslam event at Allegiant Stadium with “F9” star John Cena expected to serve as the headliner. Famed boxer Manny Pacquiao will also be fighting that weekend against welterweight champion Errol Spence Jr. Tens of thousands of spectators are expected to attend both events.