The American Society of Cinematographers has its clubhouse back.

The ASC, which was founded in 1919 and likes to boast of its status as the oldest organization in the movie industry, had spent the last two years without the use of its historic clubhouse, a Mission-style house in Hollywood that had served as its headquarters and gathering place since 1937.

But after renovations that took twice as long as originally envisioned, the ASC opened the expanded and renovated structure in a ceremony attended by ASC members, city officials and entertainment-industry figures on Thursday. 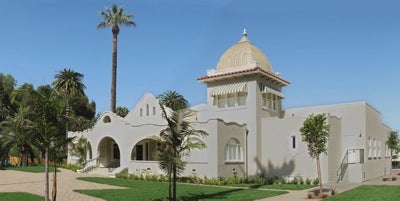 The building, which once belonged to silent film star Conway Tearle, is less than a block from Grauman’s Chinese Theater, though it was built a couple of decades before the theater. Its neighborhood is now dominated by the Hollywood and Highland center.

For seven decades, the ASC clubhouse was one of the most informal, collegial headquarters and gathering spots in the movie business, a gathering place for cinematographers who were welcomed into the prestigious, invitation-only organization.

“There is a lot if history within these walls, and we will be very careful to not disturb the ghosts,” said ASC renovation chairman Owen Roizman at start of work in May 2008.

The renovations added 1,500 square feet to the clubhouse, and expanded an original one-story administration building on the property to three stories. The boardroom was enlarged into a seminar room, the library was expanded into a permanent boardroom/library with video conference capabilities, and the bar area has become a lounge and café.

The bar itself was officially named “Billy,” in honor of ASC member and five-time Oscar nominee William Fraker (“Bullitt,” “Rosemary’s Baby”), who died on Monday. For years, it had informally borne his nickname.

The renovated clubhouse also serves as a museum of sorts, housing historical artifacts that include a Kinetoscope projector from the 1890s, along with early cameras, lenses and memorabilia.

The ASC currently has more than 300 members, as well as 150 associate members.