Of the five films nominated in the Documentary Feature category, you could say that “Burma VJ” is the most democratic. The bulk of its footage was shot not by professional cameramen working for director Anders Ostergaard and producer Lise Lense-Moller, but by “citizen journalists” – amateurs trained by the Democratic Voice of Burma TV network to surreptitiously shoot video and smuggle it out of the country, which is ruled by a military junta that stifles dissent and has tried to isolate the country from the rest of the world.
Painstakingly pieced together from pieces of film shot on small cameras and sometimes on cell phones, the film tells the story of an uprising that swept the country in September 2007; led by the country’s Buddhist monks, students and others took to the streets for days of protest that were finally quelled by military force, and by the beatings, arrests and killings of monks. U Gawsita, one of the monks who appears in the film leading some of the protests (with megaphone in photo below), later fled the country and now lives in upstate New York; he accompanied the Danish filmmakers on a recent trip to Los Angeles that included the Oscar Nominees Luncheon.
How did the project come about?
LISE LENSE-MOLLER: It started in about 2004, when I was wondering, how did this country disappear from global consciousness? I wanted to do something about the government, and how they repressed the country so much that it disappeared. And then the Democratic Voice of Burma, which was a radio project, got seed money to do something with television. And that gave us an opportunity to get footage of the uprising from inside Burma, via the journalists they were training.
They’d film for a few minutes and then take the tape out of the camera and give it to somebody else to upload or smuggle out of the country, so nobody had an overview of what existed. The uprising was in September 2007, and right after that we had less than two hours of footage, some that had been shown on CNN and the BBC. But the bulk of the footage didn’t surface until half a year later. By the end of May 2008, we had about 60 hours. 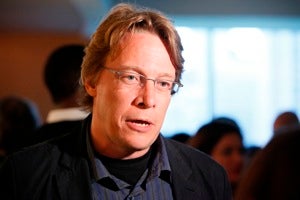 It must have been difficult to assemble into a coherent story.
ANDERS OSTERGAARD: Yeah, obviously it took a little while. And also, it was hard to find the right balance, because you could easily get lost in all this amazing material. It was all from people who were ad-libbing on their own, because there was nobody telling them what to shoot. And that was an awkward feeling, to administer material that you had no influence on whatsoever.
LENSE-MOLLER: It also came in little bitty pieces that weren’t marked or anything, so the editor had to do a huge archaeological job to find out how it fit together. He’d use Google Earth and say, “Okay, this is this street, and they’re walking in that direction, and the sun is shining, so it’s probably the same event as this footage that we got two months ago ….”
One of the devastating things about the film is that there’s such a sense of hope during the uprising, and as a viewer you think it must be leading to something positive, even as you know that it didn’t. As a filmmaker, did it create problems that you were telling a story that contained such hope but then ended in increased repression?
OSTERGAARD: Well, it was a roller coaster for the people in Burma, and it ought to be a roller coaster for the audience. It was important to capture the uplifting days, the hopefulness and the optimism of the beginning in order to better understand what the crackdown meant.
LENSE-MOLLER: And there are also some things that have changed for the better. When we finished the film, the network of journalists was in a shambles. But now it has grown, and there are a lot of young people who have been inspired to do it.
And also, U Gawsita told us that a lot of people feel very motivated by the fact that the film has been recognized. They feel that their struggle has been recognized by the world – their struggle has been Oscar-nominated, and they know that in Burma. 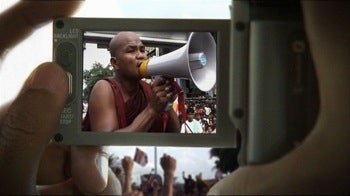 U Gawsita, how important is the nomination for your country?
U GAWSITA (through a translator): It is important not only for the people of Burma, but for the entire world. Because by nominating the film, it shows that the world is standing with the oppressed people of Burma. It’s not ignoring the suffering of the people.
Are you hopeful that things can improve?
U GAWSITA: It is impossible to say when there is going to be change, or when it is going to get better. But in the political process, there is no such thing as impossible. The question is not, is it going to happen? The question is, when is it going to happen. The only question is when.
OSTERGAARD: The monks are patient. We get anxious because we don’t see change right away, but the monks are prepared to wait for a long time.
In today’s world, how crucial is the kind of citizen journalism we see in your film?
OSTERGAARD: It’s powerful. I believe it’s very powerful. We saw the same thing happening in Iran in the spring. It is here to stay, and I think it’s a very powerful tool for democracy and awareness.  We tend to think that new technology is always “big brother is watching you,” but it can also be “little brother is watching you.” And that’s quite a good thing.
Are you going to the Oscars, U Gawsita?

U GAWSITA: If I am invited, I’ll come.