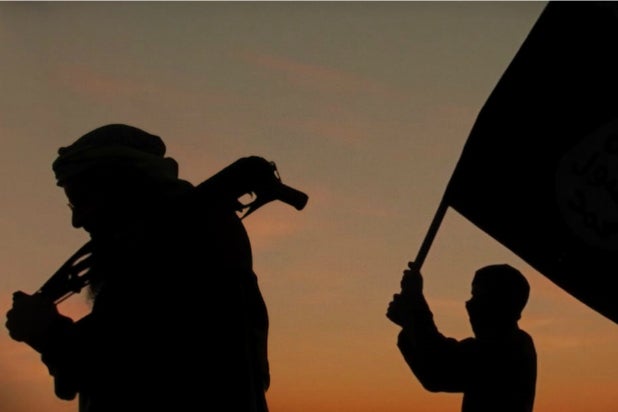 Removing ISIS from its self-proclaimed caliphate stronghold in Raqqa, Syria, has been a physical challenge of the highest order for coalition forces. Just as difficult, though, has been getting information out about the terrorist group’s actions inside the taken-over city, and countering the propaganda the Islamic State has made a crucial part of their war.

To that end, the work of the activist journalist group Raqqa is Being Slaughtered Silently (RBSS) — local Syrians risking their lives inside their hometown or as refugees in Europe to report on the devastating impact of ISIS and the Assad regime — has been an invaluable resource. Now there’s a vital chronicle of the group’s mission in Matthew Heineman’s searing “City of Ghosts.” As information-age documents go, it’s as necessary a glimpse of 21st century heroism and ideology warfare as you’re going to encounter, and a brutally effective argument for compassion toward those forced from their homeland.

Heineman’s last movie was the Oscar-nominated “Cartel Land,” which took on grassroots vigilantism in the border drug wars with a remarkable immediacy, if somewhat over-adrenalized at the expense of a deeper understanding. Heineman brings that same up-close-and-personal style to following a handful of RBSS members who fled Raqqa to create a safe base of operations in Turkey, then Germany, from which they could communicate with and post information and video from those who stayed behind. But this time the balance between nerve-jangling tension and moral-emotional clarity is stronger.

“City of Ghosts” isn’t designed to lecture you about the origins of ISIS, or use interviewed experts to explain the journalistic significance of RBSS (although there is footage of the group’s accepting a Committee to Protect Journalists at a black-tie event in New York). Rather, Heineman wants to put you in a cramped room with an exiled Raqqan as he stares at a laptop or phone that holds terrible news — the death of a relative, a personal threat from ISIS, a debilitating airstrike that only hurt civilians instead of terrorists — while he wonders if he’ll ever get to go home again, because there may not be a Raqqa to return to, or because he might be murdered.

Heineman’s main subjects, spokesman Aziz and reporters Hamoud, Hussam and Mohamad, come from middle-class backgrounds: Mohamad was a former math teacher, Aziz a biology student turned political rebel. But each quickly realized at the same time in the spring of 2014, when Syrians first stood up to Assad, and then ISIS entered the scene as supposed liberators, that the wider world needed to know about the atrocities being perpetrated by the occupying extremists.

RBSS began with the posting of clandestine video of public executions and curtailed freedoms, and it quickly put these homegrown activists in the sights of ISIS. After a series of arrests, torture sessions, and targeted killings of RBSS members, the co-founders realized they needed a secret, secure system for protecting reporters and getting the word out. It’s a spotlight-on-evil campaign that’s already shown to have rattled the enemy: soon ISIS banned all home satellite dishes, and started cellphone checkpoints.

The blood is real, though, and the graphic nature of what RBSS members watch on their computer screens, including a video of Hamoud’s own kidnapped father shot to death, may be too much for some moviegoers. The terrorists may think they’re in an action movie, but the solemnly committed Internet warriors of “City of Ghosts” barely have time to play the part of hand-wringing mourners or, in the case of Mohamad, accompanied by his wife Rose, the role of family man looking toward his future.

Watch Video: Lindsey Graham Calls Assad's Use of Syria's Bombed Base an 'FU' to Trump

Even as they try normalcy after relocating to Germany — Turkey becoming too dangerous after their journalism mentor Naji Jerf was assassinated in broad daylight — the grim hum of white nationalist/anti-immigrant sentiment in the streets and on the news serves as a reminder that the enemy in their homeland is just one front in the tragedy of their lives.
A base fear for their emotional health underscores every scene in “City of Ghosts,” never more so than when we see Aziz — who looks like he only inhales cigarette smoke, not food — fall asleep sitting in his chair, his phone sitting loosely in his hand like a digital IV.

For him and for the other brave citizen journalists in Heineman’s film, the news from Raqqa must feel like both a lifeblood for their cause and yet, all too often, a poison straight to their hearts.