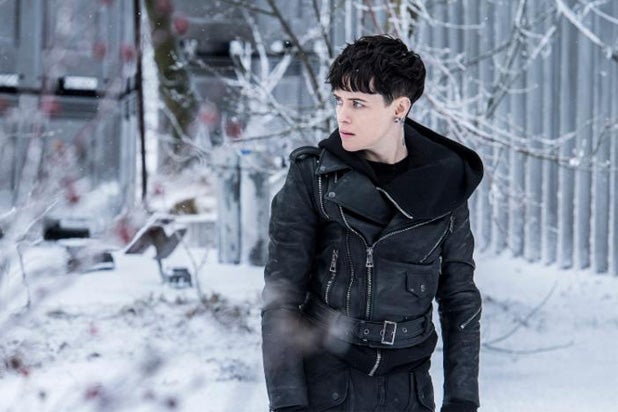 “The Girl in the Spider’s Web” heroine Lisbeth Salander isn’t just a near-superhero with a hidden identity and cool gadgets who helps others. She’s also the survivor of abuse, and because it comes out in the midst of the #MeToo movement, the film feels especially timely.

But Claire Foy doesn’t see Salander as a face of #MeToo, which she says represents something far bigger.

“No!” Foy told press at the footage presentation of the film at Sony Pictures on Tuesday. “We were doing prep while it was all going on, and I took great solace in the fact that the movie wasn’t jumping on what would be seen a bandwagon. The interest in Lisbeth has always been there, I think everyone is going to be deeply fascinated by her, and much like the #MeToo movement, it’s not because it’s timely — it’s always been there is the reality. The difference is, people are now listening and talking about it openly as opposed to ignoring it. And that’s the same with Lisbeth.”

She added, “You can trust in an audience loving a difficult character. She’s not polite, she’s not lovable, she’s not pretty… she’s not everything you think a female protagonist is supposed to be: soft. She’s hard. She makes terrible, terrible decisions and you don’t know whether you can get behind all of them. I think that’s the interesting thing about it. She’s a survivor of abuse, I see her as a survivor, if that means it represents people, it represents a movement, then that’s amazing, but it certainly… she’s not a poster girl for the [movement].”

One journalist in the audience asked Foy how she feels playing a queer, female character in a mainly straight, male-dominated landscape, to which Foy responded, “The thing I love about her so much is her unwillingness to be identified in any particular way. She seeks pleasure where she seeks pleasure, whether that’s with a man, a woman, or herself, and she has no judgment or ability to identify with other people in that way.”

Foy, who won an Emmy for her portrayal of the queen in Netflix’s “The Crown” just on Monday, said she sees similarities between Salander and Queen Elizabeth in that they don’t show their feelings.

“The thing is, Lisbeth has been so scared of her feelings for so long and it’s not safe to have them, so she doesn’t have them anymore,” Foy said. “With Elizabeth, she can’t express herself because she’s not allowed. Lisbeth is a childhood thing. It’s part of who she is.”

Director Fede Alvarez introduced 20 minutes of “The Girl in the Spider’s Web” to journalists on the Sony lot. The footage opened with a scene explored in the trailer, of Salander invading a home to punish a man who had beaten his wife and two prostitutes. But the footage showed so much more — it revealed Salander’s private home, her love life (or lack thereof) and her means of employment, as well as awesome action scenes, fiery explosions and a stellar supporting cast of Sylvia Hoeks, Lakeith Stanfield, Stephen Merchant, Sverrir Gudnason and Vicky Krieps.

Based on the book written by David Lagercrantz, “The Girl in the Spider’s Web” is the second English-language film based on the “Millennium” series of novels created by Stieg Larsson. Larsson died in 2004 before the publication of the original trilogy of novels, including “The Girl with the Dragon Tattoo” (2005), “The Girl Who Played with Fire” (2006), and “The Girl Who Kicked the Hornets’ Nest” (2007). Lagercrantz was authorized by Larsson’s estate to write new novels in the series in 2013.