TNT has finally set a premiere date for the fourth and final season of “Claws,” the cable channel revealed Thursday during its presentation at the Television Critics Association’s virtual press tour.

Season 4 of the Niecy Nash-Betts-led show will debut Sunday, Dec. 26 at 9/8c on TNT. Along with that date announcement, TNT also dropped a first look at the final season, which you can view via the teaser video above.

Per TNT, “Claws” is “a midnight-dark, wickedly funny meditation on female badness set in a South Florida nail salon. The series follows Niecy Nash-Betts’ Desna Simms, who, alongside her crew of manicurists from the Nail Artisans of Manatee County salon, rises to power in the crime world to claim her share of cash and respect. It’s the story of hardworking women trying to get by in this economy, set against the surreal, bright, gritty landscape of Florida and the luscious, absurd, extreme excesses of the crime world.” 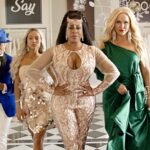 Fans have been waiting a long time for the fourth final season of “Claws,” as the third season concluded in August 2019. Two months later, the show was renewed for one more round. Of course, then the COVID-19 pandemic shut down and delayed almost all TV productions, including “Claws,” and viewers were left hanging.

Now you just need to hold out a little bit longer, as TNT will be showing an early sneak peek of the final season’s first episode on Dec. 17 during TBS’ weekly talk show series “Friday Night Vibes,” hosted by Tiffany Haddish with co-host Deon Cole.

Per the network, “As longtime fans of ‘Claws,’ Haddish and Cole will catch up with the cast as they take a trip down memory lane sharing their favorite moments from the first three seasons of ‘Claws.'”