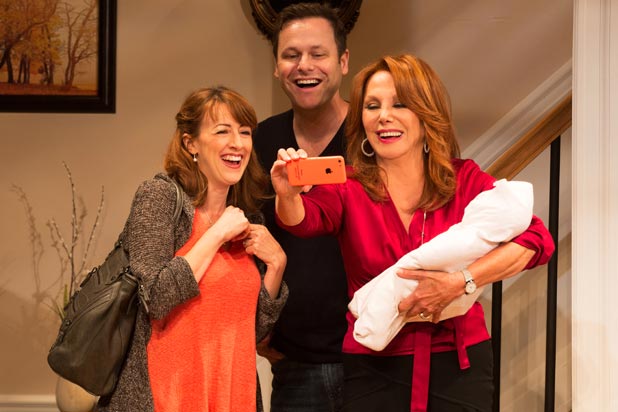 The most shocking thing about Joe DiPietro’s “Clever Little Lies,” which opened Monday at Off Broadway’s Westside Theatre, is that here’s a new comedy with no shock value.

Current stage hits “Hand to God” and “Barbecue” derive much of their humor from, respectively, severe mental illness and severe drug addiction. And at the movies, the Farrelly brothers and their offspring gross us out on a regular basis with scatology and other references to bodily fluids and functions.

Neil Simon wrote these kinds of innocently randy comedies in the beginning of his very lucrative Broadway career. Simon’s comedy is behavioral; DiPietro’s is more situational, and he’s at his best when keeping us in the dark about whether the tale being told is real or one big ballsy lie.

Playing the older married couple, Marlo Thomas and Mullavey know how to work the suspense as they carefully parse out the gradations of discovery about an extramarital affair. It’s quite a situation — one that can’t be fully disclosed here — and under David Saint’s astute direction, the fun is who knows what first, the audience or the people on stage.

Merrick and Kate Wetherhead, playing the overly content younger wife, manage to make an ordinary couple something less than irritating. They’re effective when reacting to or setting up Thomas and Mullavey, which is most of the time.

They do have one extended scene by themselves, in a car with their 3-month-old baby. It’s a moment that fuels the truism that married couples with a baby are only interesting to each other.

At the age of 77, Thomas is a marvel. She also now recalls Faye Resnick in appearance and dress. But while there’s comic potential in styling her to resemble a bit player on “The Real Housewives of Beverly Hills” it’s not the right look for this matron: a librarian-turned-bookstore owner in the New York area.