Onstage at the Democratic Convention Wednesday night, Broadway and Hollywood stars passed a microphone to sing “What the World Needs Now Is Love” — a message of inclusion and peace. But offstage, a fight was breaking out between the California delegates.

“I looked at her, because we were a few rows away, and I said, ‘That was an awful thing to say,’ and she said, ‘Well it’s true’ and she turned around,” Chavarria added. “That was two women in their 60s and 70s that were at odds. It’s that kind of tension.”

If you need a symbol of the lingering animosity between some Hillary Clinton and Bernie Sanders supporters at the convention in Philadelphia, here it is. Two older women snapped at each other as stars like Idina Menzel, Kristen Bell, Audra McDonald and Darren Criss passed a microphone in a show of love, respect and unity. 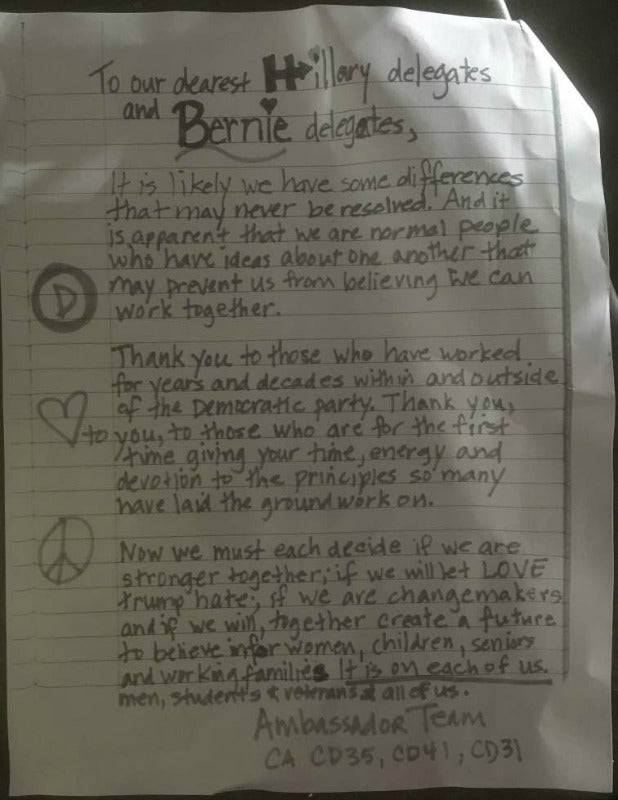 Chavarria said she was so upset by the fight Wednesday that on Thursday she handed out copies of a handwritten letter (pictured) reaching out to both Sanders and Clinton supporters.

She said that during the performance, she felt like she was the only one in the Sanders delegation who was standing for the song. Though her fellow Sanders supporters are some of the most loving and compassionate people she has ever known, she said, they didn’t want to be seen as supporting Clinton or the Democratic National Committee, which they feel favored her in the primary.

Details of the argument could not be confirmed, but two more delegates confirmed a disagreement during the song. One Sanders supporter who said he will ultimately vote for Clinton, Mark Alouf, told TheWrap the confrontation was “a bit ridiculous.”

A Clinton delegate, Anila Ali of Irvine, said there was “a little dissension, on and off, but it wasn’t disruptive … That was during the song, yes, but it wasn’t consuming us. It was sorted out.”

Ali, a teacher, said people were much more “aggressive” on the first day of the convention, but eventually started to come together, especially after Sanders endorsed Clinton from the stage. She said only about 15 percent of the Sanders delegates seem unwilling to support Clinton.

Though Clinton won California, Sanders delegates have been his most vocal supporters at the Democratic National Convention, repeatedly breaking out in chants during speeches.

One Sanders supporter, actress Shawnee Badger of Valencia, California, went gathering “Hillary” signs a few hours before her acceptance speech so she could cover them with pro-Sanders messages. She said a Clinton backer pushed her at one point, and posted a video about it on YouTube.

Some Clinton supporters have accused Sanders supporters of trying to manipulate the news media by planting stories about how they’re being silenced.

“I just saw somebody posted something on a blog about a white-noise generator in the California delegation and Bernie people being prevented from being seated,” said Clinton supporter Tony Russomanno, a retiree from Santa Cruz.

“So I went up to look for myself,” he added. “There was no white noise generator. If there were a white noise generator, you couldn’t hear the white noise over the din of the convention. Furthermore with your own eyes you can see there’s a sea of green (Sanders) shirts up there. … People are spreading falsehoods, lies, misinformation.”

It’s almost as if what the world needs now is… well, you know.