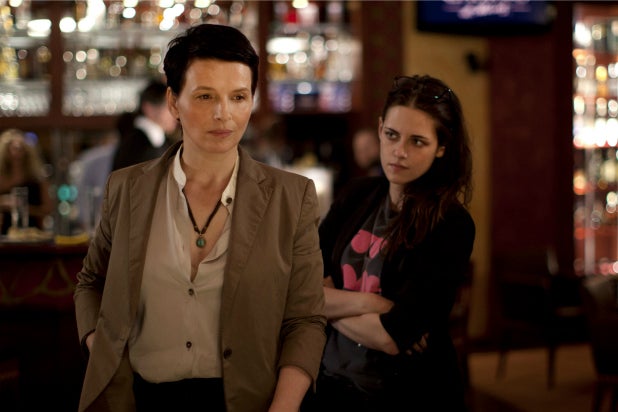 The “Maloja snake” is a phenomenon in which weather conditions in the Swiss Alps conspire to create a cloud formation that swirls through the peaks like raging river rapids. It’s also a recurring metaphor in Olivier Assayas‘ “Clouds of Sils Maria,” which brings together its own perfect conditions, namely three actresses coming together to deliver powerhouse performances that elevate the film to greater heights.

Binoche and Moretz play actresses who are nothing like themselves: Moretz’s Jo-Ann is talented, but a wild-child darling of the tabloids, while Binoche’s Maria is frightened of aging and haunted by ghosts of her past. The 40-something star is, in fact, on her way to Zurich, with personal assistant Valentine (Kristen Stewart) in tow to accept an award on behalf of her mentor, playwright and filmmaker Wilhelm Melchior. He cast neophyte Maria two decades earlier in the stage and screen versions of “Maloja Snake,” where the young ingénue played a voracious woman who destroys the life of her older female lover.

(“Maloja Snake” is a fictional work of fiction, but it bears some resemblance to Rainer Werner Fassbinder’s “The Bitter Tears of Petra Von Kant.”)

En route, Maria learns that Wilhelm has died, and while she’s still processing the loss, director Klaus (Lars Eidinger) approaches her with an offer to do the play again, only this time playing the older woman opposite Jo-Ann. The prospect of returning to “Maloja Snake” from a different angle both intrigues and terrifies her, and Maria goes back and forth over whether or not she wants to do it, running scenes with Valentine and pressing her younger assistant for her real opinions about Jo-Ann’s acting and how it differs from Maria’s. Worlds begin colliding (starlets vs. respected vets, onstage vs. offstage), and Maria may or may not have the strength to stay afloat.

Assayas, who previously explored an actress at work in his 1996 cult favorite “Irma Vep,” vacillates between over- and under-explaining what’s going on here. One minute, he’ll give us a moment as on-the-nose as Maria having a dream about rehearsing the play and saying that the past and present have blurred together, and then later some major plot point will unfold seemingly out of nowhere.

It’s also pretty clear that Assayas has no love for junk culture: we see Jo-Ann appearing on a vapid talk show and starring in a silly superhero movie, and the filmmaker has such disdain for both that he can’t create convincing simulations of either. (Kudos to whoever designed the ersatz Faber & Faber edition of “Maloja Snake,” however — nothing takes me out of a movie faster than a fake-looking book.)

When he’s in his wheelhouse, few contemporary filmmakers can touch Assayas as a storyteller — even his most enigmatic moments here will inspire lively post-screening conversations — or as a director of actors, and the work he gets from this trio is superb: Binoche constantly unveils new physical and emotional facets of Marie as Moretz makes Jo-Ann fresh-faced and cynical, generous and conniving, spontaneous and shrewd.

It’s Stewart who’s the real revelation here, however. Coming off her moving turn in “Still Alice,” she once again confounds expectations and pushes the often-parodied “Twilight” era of her career further into memory. As Valentine, she sinks into the background and lets her employer take the spotlight, but at the same time this assistant very wisely understands the strengths and frailties of the woman whose life she manages.

It’s a performance that radiates intelligence and compassion and a thousand unspoken opinions, and to see Stewart go toe-to-toe with Binoche is to watch two artists engaging as equals and bringing out the best in each other. Assayas clearly loves actresses — their spontaneity and their self-doubt, and the mercurial way they can switch from one to the other — and “Clouds of Sils Maria” offers both a compassionate exploration of their lives and a powerful showcase for three of them to do some of their best work to date.