The versatility of Joaquin Phoenix is on full display in the new trailer for A24’s “C’mon C’mon,” which finds the Oscar-winning “Joker” actor playing a charismatic uncle who forges a “tenuous but transformational” relationship with his nephew.

The film hails from writer/director Mike Mills, who burst onto the scene with 2005’s “Thumbsucker” and landed in the awards race with his 2010 film “Beginners,” for which Christopher Plummer won the Best Supporting Actor Oscar. “C’mon C’mon” is Mills’ first film since 2016’s “20th Century Women,” which was also made at A24. 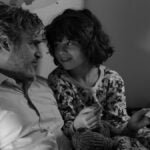 TheWrap’s review of the film out of the Telluride Film Festival praised Mills for his “soul-soothing” approach to this particular story, while also noting how refreshing it is to see Phoenix trafficking “in the mundane and the subdued.”

Watch the new “C’mon C’mon” trailer above. The film opens in select theaters on Nov. 19.