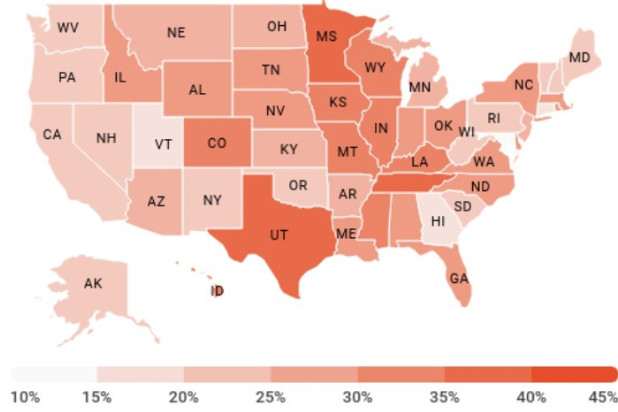 As news about the spread of the coronavirus gets more serious, a health-related map posted by CNBC offered a moment of absurdity Thursday. The map mislabeled almost every single state, eliciting a sort of Wait, what? double-take response from news consumers.

Axios chief financial correspondent Felix Salmon called it “the most glorious chart of all time.” See it for yourself via the Sun’s Chris Spargo, who posted a clear screengrab, here:

This is something to behold @CNBC pic.twitter.com/5kq2Muokw1

On the CNBC piece in question, “Americans are skipping medically necessary prescriptions because of the cost,” the map has been updated now. Montana is no longer Nebraska. Texas is no longer Utah. Hawaii is no longer Idaho. The world — or at least, the graph of the United States — is back in order.

Maybe the most befuddling and interesting part of this visually jolting map is how seemingly random the labels are. Florida is labeled as its neighboring state of Georgia while Oregon adopted the name Pennsylvania, a state located multiple time zones away. The Carolinas are still grouped together, as the Dakotas, even keeping their respective “North” and “South” identifiers, but the real Dakotas became Ohio and Tennessee. In actuality, Ohio and Tennessee are separated by Kentucky.

California and Alaska were left out of the fun altogether, labeled correctly and inoffensively.

A representative for CNBC did not immediately respond to TheWrap’s request for comment.

Ok, play time is over. The map is fixed and you can find the shocking results of an online poll that found 44% of respondents did not purchase at least one medically necessary prescription in the last year over at CNBC.