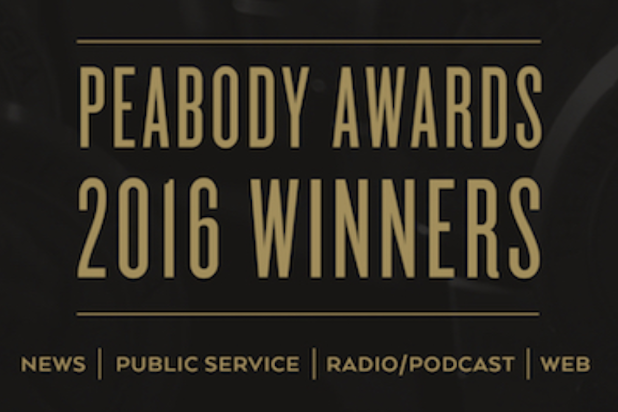 CNN and the “CBS Evening News With Scott Pelley” were among the 2016 Peabody Awards winners announced on Tuesday morning by the board of jurors.

Host Rashida Jones will honor all winners at the 76th Annual Peabody Awards ceremony on May 20 in New York. The event will be taped for a television special to air on both PBS and Fusion networks on June 2.

CNN’s Peabody is for  three packages from seasoned war correspondents featuring outstanding, on-the-ground reporting from the Middle East, respectively titled “ISIS in Iraq and Syria,” “Undercover in Syria,” and “Battle for Mosul.”

Last year, CNN’s Clarissa Ward told TheWrap that when she was in Syria for the award-winning piece, even people in the rebel-held area were curious about then-presidential candidate Donald Trump.

Pelley’s newscast won for the segment “Heart of an Epidemic, West Virginia’s Opioid Addiction,” when reporter Jim Axelrod reported on the drug crisis from “ground zero.”

Just Not Sports & One Tree Forest Films picked up the public service award for “#MoreThanMean – Women in Sports ‘Face’ Harassment.” APM’s “In The Dark,” Mars Patel LLC’s “The Unexplainable Disappearance of Mars Patel,” “This American Life: Anatomy of Doubt” and NPR’s “Wells Fargo Hurts Whistleblowers” picked up awards in the radio/podcast category. ProPublica and The Texas Tribune won the web category for “Hell and High Water.”

The Peabody Awards are based at the Grady College of Journalism and Mass Communication at the University of Georgia.