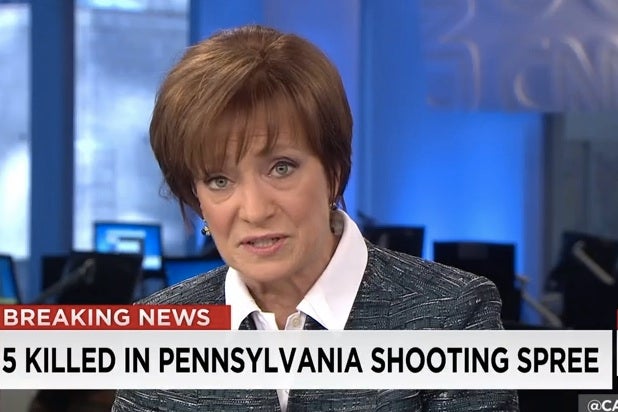 After 20 years with CNN, veteran national correspondent Susan Candiotti is leaving the network.

In an email to colleagues Tuesday morning obtained by TheWrap, Candiotti wrote:

There are many changes around us and soon I’ll be part of them. After nearly 21 years at CNN working alongside world class journalists, I’ll be moving on. I’ve been privileged to tell stories about people and institutions, despair and resilience, cruelty and kindness from coast to coast, the Caribbean, Central and South America and beyond. Not done yet! I’ll be covering an upcoming murder trial of a certain athlete near Boston starting next month. Thanks to all for helping me in every facet of news gathering. What a team!

Joining the network in 1994, Candiotti was a key correspondent in CNN’s coverage of the Oklahoma City bombing; 9/11 terrorist attacks; Boston Marathon bombing; the crash of TWA Flight 800; the “miracle on the Hudson,” and Sandy Hook elementary shooting spree. She also reported globally, including as part of CNN’s award-winning team for coverage of the Haiti earthquake.

2014, of course, saw widespread layoffs and buyouts at CNN and across Turner as part of the “Turner 2020 plan.”

Also Read: Will CNN Have Last Laugh Like ABC News?

Some notable figures let go as part of the cuts were SVP and GM of Digital KC Estenson and Northeast Bureau Chief Darius Walker. Departments that saw deep cuts included the entertainment, health, and sports units.

Despite the cuts, CNN had a strong year ratings wise, moving in to the #2 spot in the 25-54 demo, ahead of MSNBC. That, along with the network’s success in original series landed CNN on TheWrap’s media winners of 2014 list.