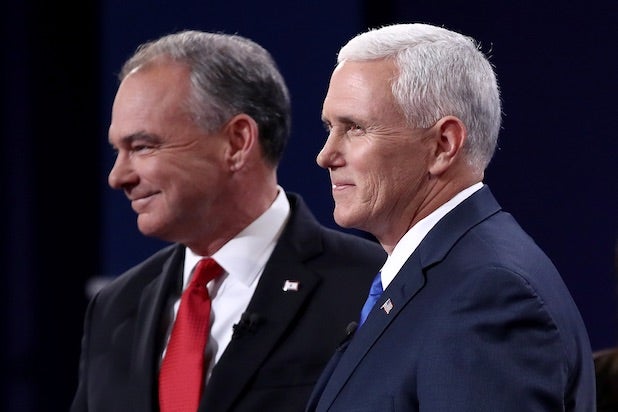 It may have been close, but a CNN instant poll handed the debate victory to Mike Pence.

The GOP vice presidential candidate met his Democratic challenger Tim Kaine in their only debate Tuesday, which aired live on multiple networks. The pair hammered at each other for 90 minutes on a wide range of subjects, including Russian leader Vladimir Putin, the abortion debate, the Syrian civil war and the business record of GOP nominee and Pence’s running mate, Donald Trump.

According to CNN, 48 percent of viewers surveyed thought Pence won the debate, compared to 42 percent for Kaine.

“That put the ‘w’ in the Trump camp tonight,” a CNN political commentator said on-air, giving the “win” to the Republican side.

Meanwhile, Trump surrogates seemed eager to exploit Kaine’s frequent interruptions during the debate, turning the tables on critics who had faulted Trump for similar behavior during the first debate with Hillary Clinton last month.

“Sen. Kaine could not stop interrupting Gov. Pence,” Trump campaign manager Kellyanne Conway complained to CBS News after the debate had ended. “It was really unhinged and unfortunate.”

However, there is not much evidence that vice presidential debates matter much when it comes to elections. Americans tend to focus on the presidential candidates rather than their running mates.

Also, this debate seemed to lack the one indelible line no American could forget, such as when Lloyd Bentsen dressed down Dan Quayle in 1988 with: “You’re no Jack Kennedy.”