“I don’t think any president should be calling any journalist a dumb son of a bitch, and to be fair to Peter Doocy, the question was fairly anodyne,” Tapper told late-night host Jimmy Kimmel, who was reveling in the insult and laughed about it during the opening monologue on his long-running ABC program.

Kimmel was surprised and said as much: “Fox News says that you’re on Team Biden and you are a mouthpiece for the Democrats, and yet here you are defending Peter Doocy, who, as far as I have been able to tell, is indeed a dumb son of a bitch.” 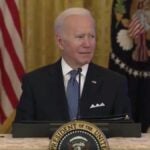 “I do not agree with that and I will say standards for decency don’t have to do with whether or not you like the people that are being treated poorly. It just has to do with the standard. And yes, I recognize that Peter’s channel probably would never come to my defense like that, but it is what it is,” said Tapper.

(Fox News’ Sean Hannity has actually defended CNN talent before. Hannity defended Tapper’s former coworker Chris Cuomo on two occasions: When Cuomo lashed out at a heckler in public who called him “Fredo” and when Cuomo was under fire for helping his brother, then-Governor Andrew Cuomo, coordinate a response to mounting sexual harassment accusations against him.)

When Doocy asked Biden on Monday whether increasing inflation could be a liability for his party ahead of the midterm elections, Biden was caught on a hot mic saying, “No, it’s a great asset. More inflation. What a stupid son of a bitch.”

He later called and apologized to the reporter directly, according to Doocy.