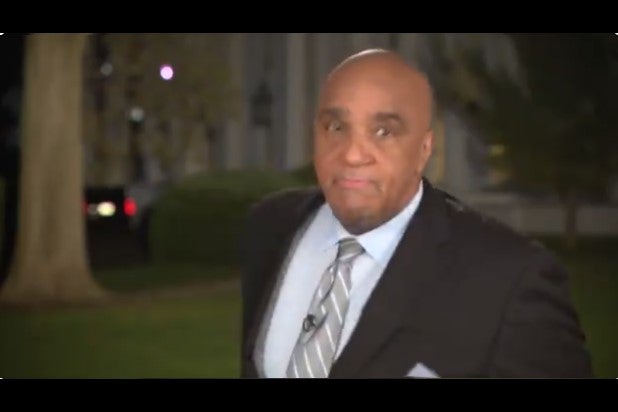 Wednesday morning brought a little humor among the unceasing waves of serious news coming out of the White House: CNN’s Joe Johns got into it with a raccoon just outside the building.

In a video tweeted by “New Day” anchor Alisyn Camerota, Johns is seen yelling, growling and throwing something at an off-screen pest on the White House lawn.

“Get!” the senior Washington correspondent yells at the interloper, before tossing an object toward it and launching back into news mode. “There he is. Now, no events on the president’s schedule today…”

Johns ventures deeper onto the lawn to shoo the shot crasher, musing, “It always comes around right about when I’m gonna go on TV.”

After Camerota’s post about the “nutty news cycle” picked up traction on the platform, the longtime newsman offered some context for his Twitter followers, writing, “So it’s the 2d [sic] time in two weeks a raccoon has shown up shortly after the @NewDay open. I think they’re attracted to the lights. No animals were harmed. I threw something to scare it off.”

Now back to your regularly scheduled programming.

This is what a consummate professional @joejohnscnn is. Seconds before his @NewDay live shot, he fends off a raccoon attack! Just another day in the nutty news cycle. #behindthescenes #whitehouseraccoon #wildlife pic.twitter.com/p13w3QICiD