CNN’s Sanjay Gupta appeared on Joe Rogan’s podcast Wednesday, where he was confronted about his employer’s coverage of Rogan’s COVID-19 diagnosis and treatment from earlier this summer. In an op-ed after the episode aired, Gupta explained why he went “into the lion’s den” for three hours.

“Joe Rogan is the one guy in the country I wanted to exchange views with in a real dialogue — one that could potentially be among the most important conversations of this entire pandemic. After listening to his podcasts for a while now, I wanted to know: Was Joe simply a sower of doubt, a creator of chaos? Or was there something more? Was he asking questions that begged to be asked, fueled by necessary suspicion and skepticism?” the chief medical correspondent wrote, explaining that he and Rogan chatted for three hours and the podcaster was more pleasant and open than he’d expected.

In addition to wanting to bring his pro-vaccine message to Rogan’s audience, Gupta said he also wanted to learn how Rogan thinks and why he thinks that way. There is room — and even requirement — for skepticism in science, he said. 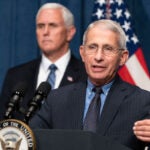 Gupta said that though Rogan rails against mask-wearing to slow the spread of the virus, he was “surprised” when the doctor bought and gifted him a “Joe Rogan Experience” mask from his own merch store. Rogan even told Gupta he’d almost gotten vaccinated earlier this year, but couldn’t make it to his appointment, an announcement that flew in the face of his categorization as wholly “anti-vax.”

“I guess a small part of me thought I might change Joe Rogan’s mind about vaccines,” mused Gupta. “After this last exchange, I realized it was probably futile. His mind was made up, and there would always be plenty of misinformation out there neatly packaged to support his convictions. Truth is though, I am still glad I did it. My three-hour-long conversation wasn’t just with Rogan. If just a few of his listeners were convinced, it will have been well worth it.”