A few months ago, Fox News appeared to overtake CNN as “the most trusted” cable news source, prompting the News Corp.-owned network to take out ads touting itself as “The Most Trusted Name in News” – a slogan that’s been used on and off by CNN since 2002.

According to a new, very random Vanity Fair/“60 Minutes” poll, however, 32 percent of Americans consider CNN “the most trustworthy source of daily news,” edging Fox News, which follows at 29 percent. (Among men, both networks tied at 29 percent.)

The New York Times (8 percent) and Wall Street Journal (7 percent) — currently embroiled in an old-school newspaper war — lead all print outlets in the poll, but are a distant fourth and fifth, respectively.

At 4 percent, “The Daily Show With Jon Stewart” came in behind the Journal in terms of daily trustworthiness. Not surprisingly, the show does not register any trust among Republicans.

Also notable: Sandra Bullock (19 percent) comes in at number two behind Warren Buffett (20 percent) as the celebrity most Americans would want to deliver their college’s commencement address. 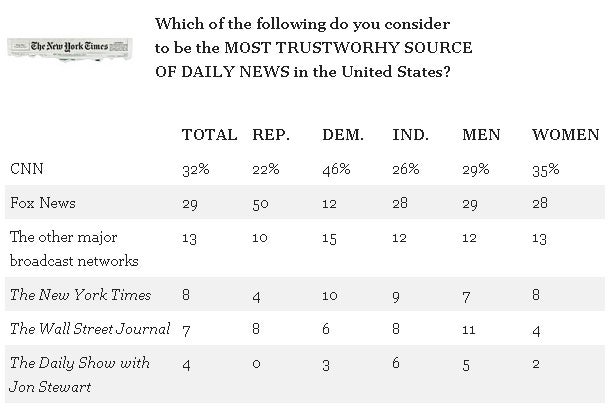