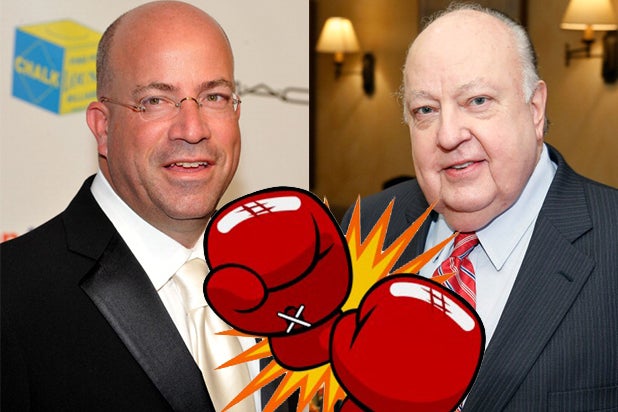 CNN chief Jeff Zucker unloaded on Fox News and its chairman Roger Ailes Friday, saying that the network is essentially a front for the Republican Party in response to a question about Gabriel Sherman’s explosive new Ailes biography — which Zucker has yet to read.

“Clearly all I can say at this point, without having read it, is from what I understand it confirms, basically, what we’ve known all along, which is that the Republican Party is being run out of News Corp headquarters, masquerading as a cable channel,” Zucker told the audience at the Television Critics Association winter press tour.

The president of CNN Worldwide said comments from Ailes in a Hollywood Reporter interview this week that CNN announced they were “out of the news business” were simply meant as a distraction from the details of Sherman’s unauthorized biography, “The Loudest Voice in the Room,” which will be released on Jan. 14.

“I think that criticism is obviously meant to deflect your attention from the book this weekend,” Zucker said in defense of his own comments from last summer.

“[Ailes] doesn’t do an interview in a long time and then does it the week that the book comes out? He’s trying to deflect attention. Clearly there’s probably no other network in American television that is covering news in such a substantial and serious way than CNN.”

A Fox News spokesperson told TheWrap that contrary to Zucker’s suggestion, the Hollywood Reporter interview took place in mid-December and had been in the works for months; the timing of its release was not in Fox’s control. The spokesperson suggested that Zucker chose to pick a public fight with Ailes and Fox on Friday to distract from CNN’s ratings, which have lagged behind Fox News and MSNBC.

But Zucker still had many more choice words for his rival networks.

“We happen to be in the news business as opposed to some other fair and balanced networks,” he said, borrowing Fox’s slogan.

He continued, “I think where [CNN] can be is providing the whole story.”

To fill that role, though, Zucker said anchors need to display more “passion” along with asking the tough questions about both sides.

Zucker also reiterated his new vision for CNN, which includes more original series programming and a robust CNN Films slate of both produced and acquired documentaries.

“We also recognize that [straight news is] not a growing niche and that there are many places to get that kind of news and information,” Zucker said.

“One of the ways we want to continue to try to remain relevant is to — in addition to the news that we will continue to cover on a daily basis — is supplement that with the series and films that we’ve added to the lineup.”

That includes eight series in 2014 — up from three last year — and 30 to 35 hours of self-produced and acquired films.

Thursday’s 9 p.m. airing of CNN Films’ “Sole Survivor” was the networks’ second highest documentary premiere after “Blackfish,” Zucker said, but Nielsen ratings show the offering came in a distant third place in both total viewers and the key 24 to 54 demographic for the 9 and 10 p.m. hours.