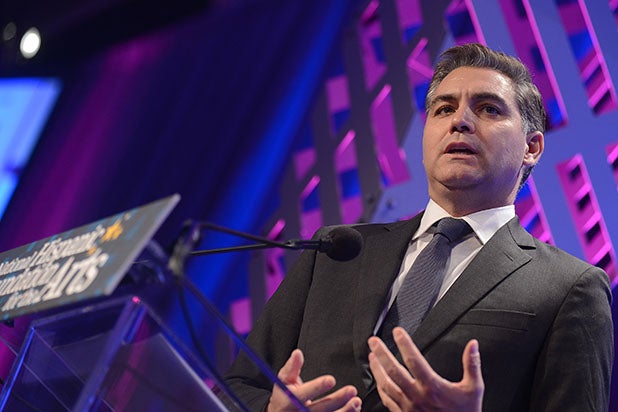 CNN correspondent Jim Acosta was denied entry to the White House on Wednesday following a heated exchange with President Trump at a press conference.

“I’ve just been denied entrance to the WH,” Acosta wrote on Twitter. “Secret Service just informed me I cannot enter the WH grounds for my 8pm hit.”

In a statement issued in a series of tweets shortly after Acosta’s initial message, White House press secretary Sarah Huckabee Sanders explained that Acosta’s “hard pass” credential had been revoked. Sanders called Acosta’s behavior at the press conference “unacceptable,” accusing him of “placing his hands on a young woman just trying to do her job as a White House intern.”

She was referring to Acosta trying to fend off a female White House aide who tried to take away his microphone at Wednesday’s post-midterms press conference.

“This is a lie,” Acosta wrote in response.

In its own statement, CNN accused Sanders of making “fraudulent accusations” and called the White House’s move to revoke Acosta’s credentials “a threat to our democracy.”

The conflict between Trump and Acosta arose when Acosta questioned Trump about the so-called migrant caravan at Wednesday’s press conference, challenging the president’s assertion that it is “an invasion” of the United States.

The president tried to cut off Acosta’s line of questioning, but Acosta continued to press him as a White House aide reached to take the microphone away. Trump then chided Acosta, calling him “a rude, terrible person.”

Watch video of the full exchange below. Acosta’s contact with aide occurs at the 1:30 mark.

President Trump to Jim @Acosta: "You should let me run the country. You run CNN."

"That's enough. Put down the mic. CNN should be ashamed of itself having you working for them. You are a rude terrible person." pic.twitter.com/GR9TIbKUok

Following the incident, CNN issued a statement in defense of Acosta.

“This president’s ongoing attacks on the press have gone too far. They are not only dangerous, they are disturbingly un-American,” the network said in a statement.

“While President Trump has made it clear he does not respect a free press, he has a sworn obligation to protect it. A free press is vital to democracy, and we stand behind Jim Acosta and his fellow journalists everywhere.”

I’ve just been denied entrance to the WH. Secret Service just informed me I cannot enter the WH grounds for my 8pm hit

The US Secret Service just asked for my credential to enter the WH. As I told the officer, I don’t blame him. I know he’s just doing his job. (Sorry this video is not rightside up) pic.twitter.com/juQeuj3B9R

President Trump believes in a free press and expects and welcomes tough questions of him and his Administration. We will, however, never tolerate a reporter placing his hands on a young woman just trying to do her job as a White House intern…

This conduct is absolutely unacceptable. It is also completely disrespectful to the reporter’s colleagues not to allow them an opportunity to ask a question. President Trump has given the press more access than any President in history.

Contrary to CNN’s assertions there is no greater demonstration of the President’s support for a free press than the event he held today. Only they would attack the President for not supporting a free press in the midst of him taking 68 questions from 35 different reporters…

…over the course of 1.5 hours including several from the reporter in question. The fact that CNN is proud of the way their employee behaved is not only disgusting, it’s an example of their outrageous disregard for everyone, including young women, who work in this Administration

As a result of today’s incident, the White House is suspending the hard pass of the reporter involved until further notice.

This is a lie. https://t.co/FastFfWych