Rep. Marjorie Taylor Greene’s ghoulish comment that the country needs to stop worrying about COVID-19 because “we can’t live forever” stepped over a line for CNN’s Jim Acosta, and he is having none of it.

On Saturday, Acosta dedicated a segment to the “so-called leaders” dividing the country and spreading misinformation regarding vaccines and masks, namely, Greene and Florida Gov. Ron DeSantis.

Acosta rolled a clip from Greene’s appearance on the right-wing network “Real America’s Voice” from earlier this week, where she falsely claimed that COVID hospitalizations have been overblown.

“So while the news tries to tell us the hospitals are slam-packed with COVID, that’s just not the case,” Greene said. “Everybody needs to get back down to common sense and remember that, you know, we’re human, we can’t live forever, we’re going to catch all kinds of diseases and illnesses and other viruses, and we get hurt sometimes.”

In response, Acosta didn’t hold back his anger. “Yes, we can’t live forever,” he said. “But that doesn’t mean we have to die now. You can get a vaccine and postpone dying. Live now, die later!”

In that same Thursday interview, Greene expressed concern over increased mask mandates in the event that the vaccines are approved by the FDA, claiming all the while that she is not anti-vax.

“Once the vaccines are approved by the FDA, we’re going to see the mandates for vaccines ramp up far more than they are right now,” she said. “And I fear they’ll become law in some cities and some states. Biden would love to make it the law of the land.”

“Again, I’m not anti-vax,” she insisted. “I’m completely for people being allowed to make choices.”

“Yes, [hospital] waiting rooms get full,” she said. “But guess what? The waiting rooms are full of all kinds of things, not just COVID,” attributing rising hospitalization numbers to “car accidents” and “other illnesses” like “cancer.”

Acosta also noted – as did the chyron beneath him that read “Why Aren’t We on the Same Team When It Comes to Covid?” – that there is a divide in the country of vaxxers vs. anti-vaxxers, which includes some prominent athletes in the latter category. But the journalist’s beef is with politicians.

“Down in Florida, Gov. Ron DeSantis has backed off of his threat to dock the pay of school officials who put in place mask requirements for students as the Delta variant is surging across the state,” Acosta said. “He couldn’t get his way so it sounds like he’s throwing in the towel.”

“How can you blame our athletes, when many of our so-called leaders are acting like spoiled brats?” Acosta added. 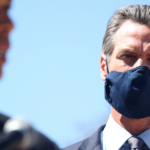