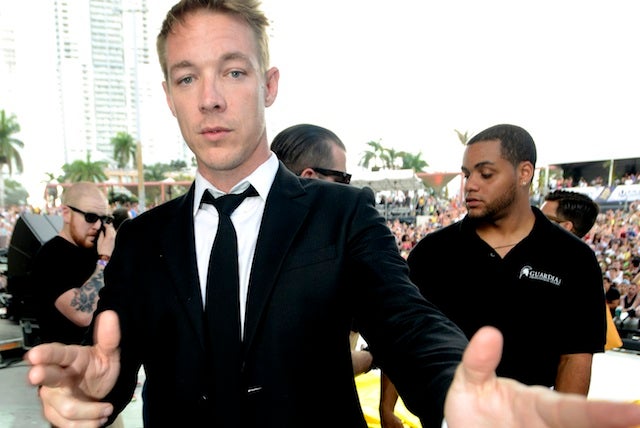 When prominent DJ and music producer Diplo appears at Coachella this weekend, he will take the stage with a new title on his resume — film producer.

Fox has acquired a pitch from writers Adam Weinstock and Andy Jones, which Diplo (ne Wes Pentz) will executive produce with business partner Kevin Kusatsu. The film's producers declined to divulge too much about the plot, but said it's about a kid who wants to be a DJ more than anything in the world. He goes to a music festival to find Diplo and make his dream come true.

Producer Trever Engelson said it would bottle the experience of a major dance music festival for audiences that either haven’t been or want to relive their hours of gyrations, glowsticks and pounding bass.

Just as "Saturday Night Fever" defined disco and Eminem starred in the breakthrough rap movie “8 Mile,” the producers of this project will try to make the seminal movie about America’s new favorite kind of music, electronic dance music.

“It’s a very exciting world that nobody is doing anything with,” Engelson told TheWrap. "There are people using the EDM world in an inauthentic way or as a set piece because it’s a cool thing. Our movie will be authentic to the EDM festival experience.”

Engelson declined to elaborate on which projects he felt were inauthentic, but there are several movies in develoment set in the world of dance music, including Summit’s “Spinback” and Warner Bros.’ “Dead Spy Running.”

Electronic dance music is an umbrella term encompassing a wide range of electronic-based musical genres, including house, dub step and techno. Though many of those genres have been popular in Europe for the past two decades, past attempts at reaching the mainstream in the United States fizzled. Until now.

DJs like Skrillex, David Guetta and Diplo have not only come to headline major festivals, they’ve also had a significant influence on several distinct musical genres, from pop to rap. Diplo attained a new level of fame from his early work with M.I.A. while Guetta has worked with everyone from Kid Cudi to Usher.

EDM’s rise coincided with the music industry’s heightened dependence on touring as consumers stopped buying albums. That meshed well with a type of music best enjoyed in-person, where fans can dance and the DJ can feed off a crowd’s energy.

Certain festivals, such as Electronic Daisy Carnival and the Ultra Music Festival, draw more than 100,000 people in one weekend.

Diplo has been at the forefront of this, recording his own music, making music with Switch under the name Major Lazer and hosting regular events through his label Mad Decent.

ThIs project came together because Weinstock and Jones are both represented by Underground’s Noah Rothman, who also represents Diplo. Rothman will executive produce while Engelson will produce.

Rothman sent his clients to Vegas with Diplo to understand what the world is like and craft a real narrative.

"It's not a 3D concert movie; it's a comedy," Rothman said. "We want to give the audience an experience of a festival and a party like 'Project X' where they leave the movie and want to go to one of these things.

Rothman said that Diplo would recruit his friends in the industry to help make their faux festival seem as authentic as possible. They will also recruit actors and extras that one would run into at a show like Coachella or the more EDM-focused Ultra Musical Festival.