Apple will re-release its Best Picture nominee “CODA” into theaters starting next weekend and will do so with a series of free screenings open to all audiences.

Beginning next Friday, February 25, and running through Feb. 27, “CODA” will be presented in a limited theatrical run across the U.S. and London, free of charge and on a first-come, first-served basis. And each screening will have open captions so that it’s inclusive of both Deaf and hard of hearing audiences.

Below is the list of theaters offering free screenings, and here is the link to get “CODA” tickets.

The film’s director Siân Heder will also be present at a live Q&A for the film for one of its screenings in Los Angeles, which will also have an interpreter present to translate into ASL. 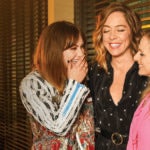 “CODA” first premiered at Sundance in 2021 and won the Audience Award and the Grand Jury Prize in the Dramatic Competition, and over a year later on its road to a chance at a Best Picture win, the film has been nominated for three Oscars, including for Best Supporting Actor Troy Kotsur, who is the first Deaf male actor to ever be nominated for an Oscar. The only other Deaf actor to ever be nominated and subsequently win is Marlee Matlin, Kotsur’s co-star in “CODA.”

“Every so often, a film comes along that strikes a deep emotional chord for audiences who celebrate its win for humanity. ‘CODA’ does just that. Siân and the amazing cast and crew of ‘CODA’ gave the world a gift with this film, and we are inspired to pass this gift on,” Matt Dentler, Apple’s head of features, said in a statement.

“CODA” premiered in theaters and globally on Apple TV+ in August 2021. The film stars Emilia Jones as the title CODA, or a child of Deaf adults and the sole hearing person in her Deaf family, a 17-year-old student who dreams of a career as a singer. The film also stars Kotsur, Matlin and Daniel Durant, as well as Eugenio Derbez and Ferdia Walsh-Peelo.

The film was also nominated for Best Ensemble Cast for the SAG Awards, which represents the first time a predominately Deaf cast has been nominated for the guild’s top prize.