Stephen Colbert was in a chipper mood on Wednesday’s episode of “The Late Show,” thanks to the victory of Democrat Raphael Warnock over Republican Herschel Walker in the Georgia U.S. Senate. runoff election Tuesday.

And to celebrate, Colbert dusted off some jokes he and his staff had written for the show back on election day (Nov. 8), but didn’t get to tell because the race between Warnock and Walker was forced into a runoff.

“I’m gratified because, with the election over, I finally get to use the jokes we wrote a month ago,” Colbert said right off the bat. He was then handed an extremely dusty envelope, sealed with wax (get it? Because it’s old?) which contained the jokes.

“Warnock has won Georgia, and it’s fitting he’s a reverend, because all I can think when I hear that is, ‘thank God,'” went the first joke.

“This is a tough break for Walker,” Colbert said as he read the second joke, “though it will take him a couple of days to understand what has happened.” 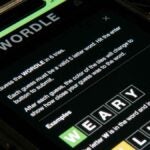 “With this loss, Walker is expected to return to his previous job, lying about having previous jobs,” Colbert continued. The third joke, of course, referred to some of Walker’s many, many lies. “But on the bright side, it gives him more time to spend with his family, and more time to figure out who that is.”

Then Colbert continued with some presumably new material. “One interesting wrinkle is that Walker was hand-picked by the former president,” Colbert continued, referring to Donald Trump, “against the advice of everyone who had met Herschel Walker. But, last night Walker did something that goes against his mentor’s core beliefs: He accepted reality.”

Colbert was referring here to Walker’s speech following the loss. Walker didn’t actually say the words “I concede” nor did he congratulate Warnock or even mention him by name. But he did basically accept his loss, and urged his supporters to accept it too.

“And,” Colbert continued, “in celebration of you winning and losing, we’ll be sending you this beautiful trophy: ‘World’s Most Dad.” This was, of course, a reference to Warnock’s many secret children and the many, many lies he told about them.

“So a bad night for Herschel Walker, but a great night for Raphael Warnock, who had to win 5 elections in the last 2 years,” Colbert noted. Then Colbert played a clip of Warnock’s victory speech where he said in part, “after a hard-fought campaign, or should I say campaigns, it is my honor to utter the four most powerful words ever spoken in a democracy.”

“We have the meats?” Colbert quipped.

“The People have spoken” is what Warnock said in the actual clip, in case you’re curious.

Colbert went on to note that Warnock’s victory “is yet another blow” to Donald Trump. “Even before last night, the major candidates that he endorsed in Nevada, Arizona, Pennsylvania, New Hampshire and Michigan all lost,” he said.

Colbert then noted how some GOP insiders argue that “Georgia may be remembered as the state that Broke Trump once and for all.”

“Yes! Georgia broke him,” Colbert said. “Or as I just texted everyone on my phone, peach emoji, fist emoji.”

There’s plenty more, and you can see the whole monologue above right now.