While it may seem like everything is going very poorly for Donald Trump and his administration this week, that’s not entirely true. The U.S. managed to have several Americans who had been imprisoned in North Korea returned on Wednesday. But Trump, of course, couldn’t help but repeatedly ruin the moment by praising Kim Jong Un while standing next to those freed Americans, and Stephen Colbert was all over him for it.

But first, Colbert gave credit where it was due.

“I give the president a lot of the business — you know I hit him with the zingers — but it’s nice when you see good things happen in Trump’s America. For instance, early this morning, the three American hostages freed by North Korea landed safely in the United States,” Colbert said to open his monologue on “The Late Show” Thursday night.

“That’s great news. You got to give it up. When good things happen, you gotta give it up. The president was there to meet the freed men, along with Melania, who’s hoping to be freed next. Trump made some brief remarks. Pretty simple. All he had to do was not thank the murderous dictator who had imprisoned these men in a windowless black hole.”

Then “The Late Show” played a clip of Trump doing exactly that.

“We want to thank Kim Jong Un, who really was excellent to these three incredible people,” Trump said.

Also Read: Kimmel Gives Us a Glimpse At Exactly How Bizarre a Trump Nobel Prize Nomination Would Be (Video)

“No, he wasn’t. He wasn’t ‘excellent’ to them. and you know the hint that he wasn’t? They look happy to be with you,” Colbert said. “Okay? That’s how low the bar is. You don’t negotiate the release of people from an ‘excellent’ situation. ‘Don’t worry, we’re sending in SEAL Team Six to extract you from that all-inclusive beach vacation.’ And Trump was not done praising the hostages’ kidnapper right in front of them. This time because Kim let them go before his meeting with Mike Pompeo.”

Trump: “And he was nice in letting them go before the meeting. Frankly, we didn’t think this was going to happen, and it did.

“Coincidentally, that’s also what it says beneath Trump’s official portrait,” Colbert said as this image appeared on screen: 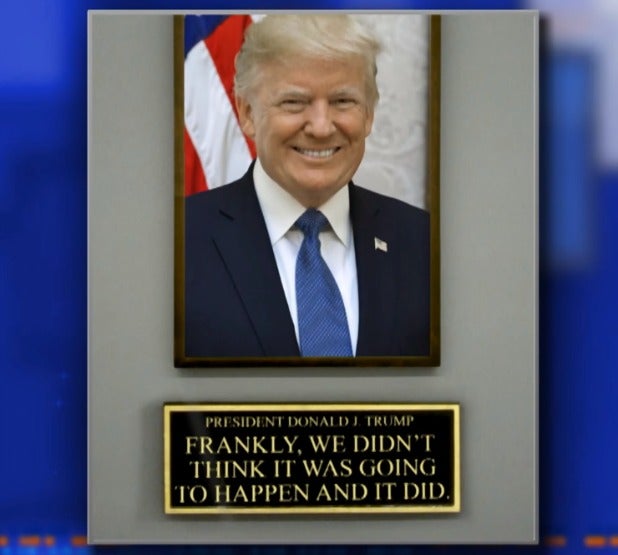 “They’re eventually going to carve his head on Mt. Oopsy Daisy. Of course, no Trump accomplishment would be complete without a little bragging about ratings,” Colbert said, as another clip played of Trump making an odd comment:

“I want to thank you all. It’s very early in the morning. I think you probably broke the all-time in history television rating for 3 o’clock in the morning, that I would say,” Trump said.

“Yes, that is how history judges all presidential accomplishments: ‘did it do better than an infomercial for Slap Chop?’ ” Colbert joked.

Also Read: Colbert Goes Off on Trump Over Iran Nuclear Deal: 'You Literally Just Backed Out of an American Promise' (Video)

You can watch Colbert’s monologue from “The Late Show” on Thursday in the video embedded at the top of this post.