We’re at the point in the Trump presidency where it feels like nobody knows which direction is up anymore, and this was reflected Wednesday night by late-night hosts slinging jokes that felt a little bit more on edge than usual. Over on ABC we had Jimmy Kimmel quipping about how “democracy had a good run,” and on “The Late Show,” Stephen Colbert was almost manic in how he delivered his monologue.

“Things are getting testy between the special counsel and the president. Yesterday, 49 questions — you hear about this? — 49 questions that Mueller supposedly wants to ask Trump were leaked. and today we learned that when Trump refused to voluntarily answer Mueller’s questions, Mueller said he could issue a subpoena for the president to appear before a grand jury,” Colbert said to cheers from the audience. “Yeah, I don’t know. I don’t know about that. I understand what you’re saying, but if you want Trump to show up, you can’t threaten to slap him with a subpoena. You have to offer to spank him with it.”

Colbert then circled back to the topic of those 49 questions, reading from a Washington Post story about where that list of questions actually came from.

Also Read: Seth Meyers Wants to Remind You That Mike Pence Sucks Just as Much as Trump Does (Video)

“And who knows what he’ll actually ask Trump, because those 49 questions that were leaked? Mueller didn’t even write those. In actuality, Mueller’s team agreed to provide the president’s lawyers with more specific information about the subjects that prosecutors wished to discuss with the president. With those details in hand, Trump’s lawyer Jay Sekulow compiled a list of 49 questions that Trump’s team believed the president would be asked.’ Those questions are made up. They’re just Mueller fan-fiction. It explains why in question 35 is James Comey finally hooking up with Rod Rosenstein,” Colbert joked.

“But why would the Trump team purposely leak their own questions, you question? Well, apparently, Trump now plans to point to the list as evidence that Mueller has strayed beyond his mandate and is over-reaching. ‘Look, this Mueller guy, if he’s going to ask me even half of the things my lawyers totally made up, he’s gotta go.’ ”

This is where Colbert started to lose it a little bit, getting very theatrical from this point on.

Also Read: Jimmy Kimmel: 'Democracy Had a Good Run and Maybe It's Time for Us to Try Something Else' (Video)

“And Trump is attacking Mueller’s right even to question him, tweeting this quote: ‘The questions are an intrusion into the President’s Article 2 powers under the Constitution to fire any Executive Branch Employee…what the President was thinking is an outrageous…as to the President’s unfettered power to fire anyone… ‘ Joe Digenova, former U.S. Attorney,’ ” Colbert read.

“Okay, I think — if I can decode that, I think what ‘Uncle Off-His-Meds’ is saying here is that we’ll have a constitutional crisis if he can’t fire the people investigating him for firing people who were investigating him. Right now, Nixon is rolling over in his grave saying, ‘I told you I wasn’t a crook.’ ”

Colbert then spent a solid 20 seconds doing Nixon’s V sign with his fingers while imitating his weird laugh — getting really close to the camera at one point. 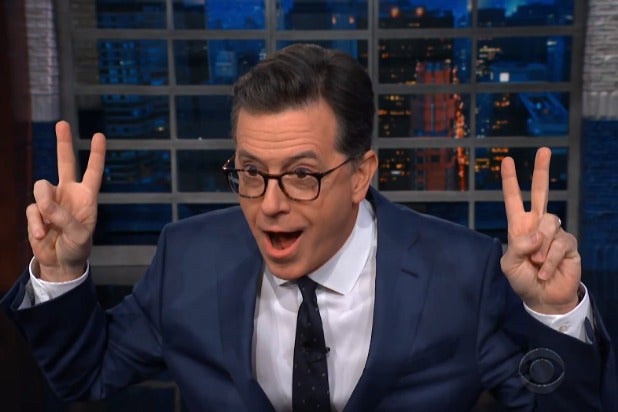 Eventually, Colbert gathered himself and continued through another Trump tweet.

“Then Trump tweeted, ‘A Rigged System – They don’t want to turn over Documents to Congress. What are they afraid of? Why so much redacting? Why such unequal ‘justice?’ At some point I will have no choice but to use the powers granted to the Presidency and get involved!’ ” Colbert read.

“Sir, you’re already involved. technically, the defendant is the star. And today, you’re a star! A big, bright, beautiful star!”

You can watch this portion of Colbert’s monologue from Wednesday’s episode of “The Late Show” in the video embedded at the top of this post.