There probably wasn’t any question that  Stephen Colbert probably isn’t a fan of this week’s Republican National Convention. But in case you had any doubts, “The Late Show” dropped a skit right as the RNC began, comparing Donald Trump to Thanos, and the rest of the Republicans to other genocidal Marvel villains.

“The Late Show” is running live episodes for each night of the Republican National Convention, but that doesn’t mean that Colbert and co. can’t prep some things ahead of time. And on Monday, the opening skit they had ready was “America: Endgame,” a parody of “Avengers: Endgame” that puts many key figures in Donald Trump’s government in the roles of Marvel villains.

The bit, which placed the faces of Republican figures in a jokingly primitive cut-and-paste fashion on scenes from the a few different Marvel movies. We got attorney general Bill Barr as one of those giant apes from the big battle at the end of “Endgame.” We got Rudy Giuliani as one of the Chitauri aliens from first “Avengers” film.

We got Ivanka Trump as a member of Thanos’s Black Hand, Proxima Midnight, and Jared Kushner as Corvus Glaive, Midnight’s lover. We got Melania as Hela from “Thor: Ragnarok,” saying “be best.” We got Mitch McConnell as the Red Skull. We got Mike Pence as himself, for some reason. And lastly, Eric Trump shows up at the end in a child’s Batman costume.

Donald Trump himself is also in the video. He’s Thanos. In the clip, we see him hold up his hand to snap his fingers, and he says “I don’t take responsibility at all” before snapping mailboxes out of existence and bringing back destroyed statues of Confederate generals. 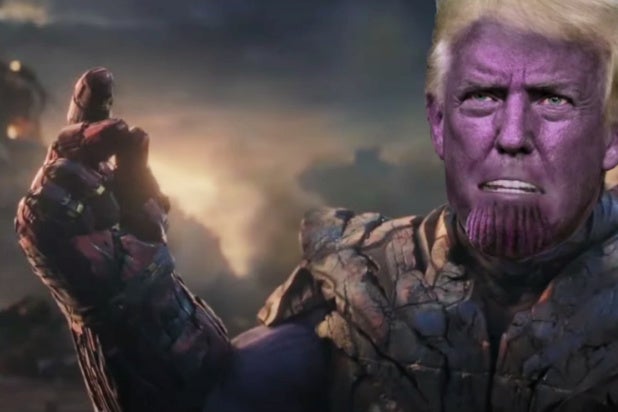 “The Late Show” posted the meme-ish video on YouTube right around the start of Monday’s night’s festivities at the Republican National Convention. And it was an eventful night, with Donald Trump Jr. and his girlfriend Kimberly Guilfoyle dominating the headlines for some very interesting speeches they made.

You can watch this sketch from Monday’s episode of “The Late Show With Stephen Colbert” in the video embedded in this article, or on YouTube here.