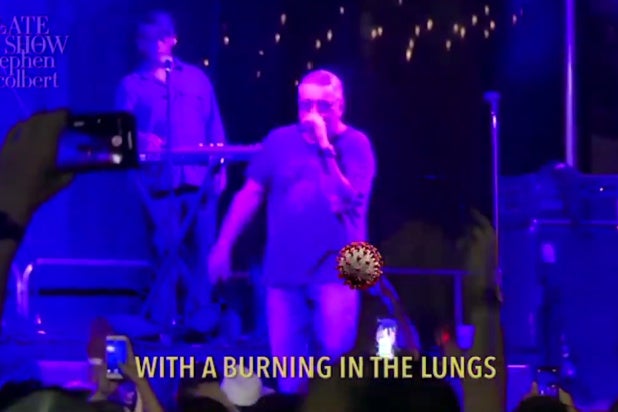 Expect the story of the Sturgis Motorcycle Rally — expected to draw 250,000 people or more to Sturgis, South Dakota over the course of the event  — to keep going for a while, as the gathering will continue on through Aug. 16. And on Tuesday, “The Late Show With Stephen Colbert” got in on the fun with a little video sketch to kick off the latest episode, featuring Smash Mouth. Sort of.

In case you’re not up on the news, the Sturgis Rally drew a lot of attention over the weekend thanks to many images of massive crowds of folks hanging out in very close proximity — and very few people wearing masks. There’s concern, then, that Sturgis could serve as a “super spreader” event for COVID-19, with attendees potentially taking the coronavirus home with them.

And in the midst of all that, Smash Mouth found themselves at the center of this topic of conversation as video spread of the “All Star” band playing a show in front of a mask-free crowd, as if we weren’t currently in the middle of a pandemic that has been significantly more severe in the United States than it has been anywhere else in the world.

So Colbert and “The Late Show” paid homage to that whole thing with a doctored video of Smash Mouth performing “All Star,” the band’s signature hit from “Shrek,” at the Rally. But in this version of the video, the lyrics are a little bit different. Colbert introduced a bit of COVID-19 flavoring to the ubiquitous track. You can watch the video here.

On #LSSC tonight: Smash Mouth remixed their biggest hit when they performed at Sturgis. pic.twitter.com/fyjmsZiUSm

“Somebody once told me the virus was baloney. He ain’t the sharpest tool in the shed,” Colbert’s version of the song goes, as an image of Donald Trump appears on screen. “I was feeling kinda numb with a burning in the lungs. And I said I don’t think that it’s COVID. Well, the chills start coming and they don’t stop coming. Feelin’ short of breath like I just went running. Didn’t make sense to stay home, no fun. Instead went out, infected everyone.

“So much to touch, so much to lick, so what’s wrong with my little droplets? You’ll never know if you don’t test. Why do I feel pain in my chest? Hey now, we’re contagious, we’re in Sturgis, no mask. Hey now, you’re a biker, we’re all sharing one flask. This is worse than the flu. I’ll be seeing you in the I.C.U.”

Sounds about right. Thanks for making us think about that, Colbert and co.