It’s been quite a week for Donald Trump. He had his summit with Kim Jong Un and keeps saying nice things about him to everyone’s horror. His old lawyer Michael Cohen may be about to flip on him. The attorney general of New York is suing the Trump Foundation for breaking laws governing charities. And it’s rumored that more high profile members of his staff may be about to make their exits. Having dealt with the other stuff already this week, Stephen Colbert took aim at that last item in his monologue on “The Late Show” Friday night.

Colbert then, for the second time this week, took a swig from a glass of liquor during his monologue. Because that’s what kind of week it’s been.

“Tons of people at the White House are ready to bolt, including Trump’s chief of staff and shaved Uncle Sam, John Kelly. Last week Kelly told visiting senators that the White House was ‘a miserable place to work.’ How did you not know that going in? The writing’s on the wall! Literally. Reince Priebus scrawled it in his blood.”

Then “The Late Show” displayed this image on screen. 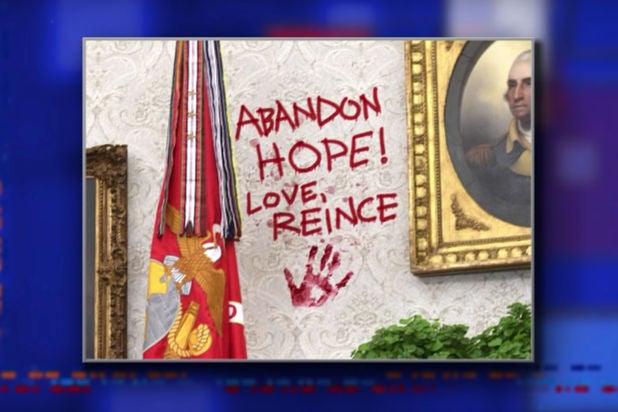 Also Read: Kimmel Clowns Trump for Downplaying Manafort's Role in His Campaign: 'If This Is a Witch Hunt, They Caught a Witch'

“Of course, Trump has had some trouble holding on to staff. One expert estimates the administration turnover has been 51 percent. To put that in perspective, that’s five percent more than his share of the popular vote,” Colbert said, to cheers from the audience.

“And it’s getting worse. They say it’s getting worse. According to sources, Trump doesn’t care. He likes removing any barriers that might challenge him. Yes, he hates all barriers — spell check, the constitution, condoms. Cannot stand them. Allegedly,” Colbert said. “And, in fact, so many people are leaving this administration that earlier this week, the White House sent out this actual flyer for an ‘executive branch job fair.’

“Oh, good. So now we’re staffing the administration the same way JC Penney recruits at a community college. ‘Okay, Mr. Johnson, I’ve got your resume right here. It’s very impressive. Where do you see yourself in five years? Or less with good behavior.’ Now, the flyer was blasted out in an email entitled ‘Interested in a job at the White House?’ To which the Gmail app offered those cute little auto-suggested responses like… ” 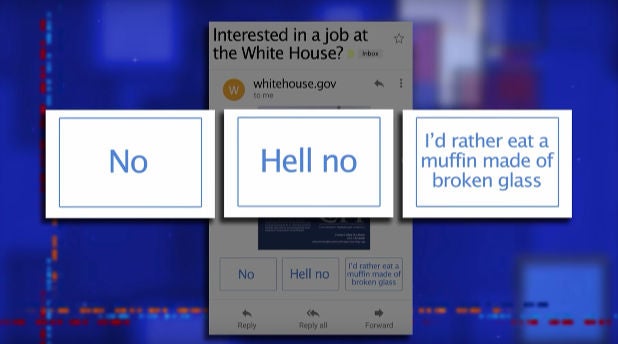 “And the next person they have to replace might be White House press secretary and woman who just ate a bug because CNN said she didn’t, Sarah Huckabee Sanders. CBS is reporting that Hucka Sands told friends she plans to leave the administration at the end of the year. And by ‘friends,’ of course, they mean her room full of unblinking porcelain dolls,” Colbert said, before dropping an epic pun.

“And it’s not just Sanders who might be leaving. It’s also her principal deputy press secretary, Raj Shah. So Trump may have colluded with Russia, but he will no longer be colluding with Raj Shah.”

Also Read: Colbert: 'Michael Cohen Is Going to Sing Like a Canary, Which Is Ironic Because It's Trump That Looks Like One'

Colbert took a bow after that one.

“But the White House is pushing back against these claims. Hucka Sands tweeted: ‘Does @CBSNews know something I don’t about my plans and my future? They ran a story about my ‘plans to leave the White House’ without even talking to me. I love my job and am honored to work for @POTUS.’ So she unequivocally denies that she’s leaving her job,” Colbert said.

“She will be missed.”

You can watch this portion of Colbert’s monologue from Friday night’s episode of “The Late Show” in the video embedded at the top of this post.