It was an eventful evening Tuesday night on “The Late Show with Stephen Colbert” with Colbert hosting President Bill Clinton for a lengthy interview. But sandwiched in between that conversation and his monologue was short segment in which Colbert sat at his desk and ranted a little bit about how much of a liar Donald Trump continues to be. 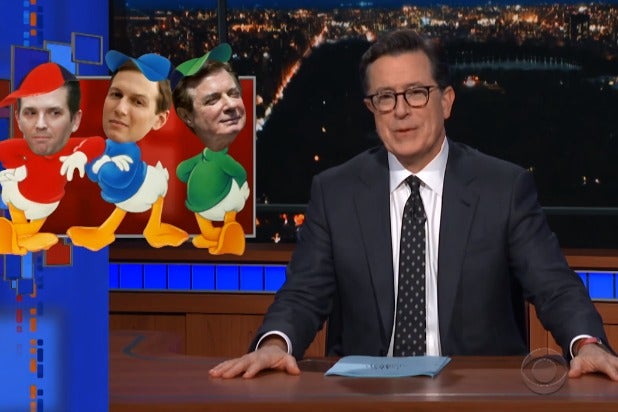 “Well, before the election, after being promised dirt on Hillary Clinton, they met with Kremlin lawyer Natalia Veselnitskaya. Once the news of this meeting became public, Don Jr. released a statement saying he was meeting about adoptions. They were hoping to find a loving family for Eric,” Colbert joked. “Trump clearly wrote that statement for his son. You knew as soon as you read it. But if that were true, that would be obstruction of justice, so the president and his team have repeatedly denied having anything to do with it. But it turns out Trump’s lawyers admitted in a letter to Mueller that ‘the president dictated a response to the New York Times article on behalf of his son Donald Trump Jr.’ Of course he did! That letter could not have been more by Donald Trump if it had been written in bronzer on the back of a KFC bucket.

“Because — and here’s the thing you can’t forget — everything you think happened with Donald Trump is always exactly what happened. Anyone who’s surprised to find out he was lying probably still watches ‘Titanic’ going, ‘Ooh, I hope the boat’s going to be okay.’ “

Colbert continued with an illustration to describe just how fully ludicrous the defense presented by Trump’s legal team is on this matter.

“So this letter admits some guilt but it stresses that ‘the president is not required to answer to the office of the special counsel, or anyone else, for his private affairs with his children.’ Yes, this is a sacred father-son bonding moment,” Colbert said. “We all remember when dad would take you down to the old fishin’ hole and say, ‘Son, that’s where I’m going to hide your body if you admit we colluded with the Russians. Don’t tell your mother. Which one was she again?’ “

Also Read: Colbert: Trump Won't 'Exercise His Power' to Pardon Himself Because 'If There's One Thing Donald Trump Won't Do, It's Exercise' (Video)

You can watch this entire segment in the video embedded above.