A new report from the New York Times recently found that Subway’s tuna sandwiches might not be made of tuna at all — which lead late-night host Stephen Colbert to suggest that maybe, just maybe, the sandwich chain is taking a page from “Soylent Green” and serving some unscrupulous meats to its guests.

In a new “The Late Show with Stephen Colbert” cold open gag, Colbert suggests that Subway tuna is actually human flesh instead of the chicken of the sea.

As the beginning of the gag pointed out, two women decided to sue the Subway — the world’s largest sandwich chain which famously boasts its motto is “eat fresh” — for using “anything but tuna” in its sandwiches. 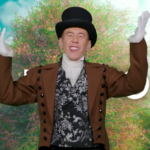 The Washington Post reported at the time the lawsuit was filed in January that the plaintiffs ordered “multiple samples” to be tested independent labs. The lawsuit alleges that all of the lab results proved that the so-called fish is actually “a mixture of various concoctions that do not constitute tuna, yet have been blended together by defendants to imitate the appearance of tuna.”

Unusually, though, the tuna tests by both the lawsuit’s plaintiffs and recent tests done by the New York Times still can’t determine what the “meat” actually is — they just know it isn’t any form of tuna fish. The sandwich is historically one of the company’s best-selling products, though, as a spokeswoman for Subway told the Times last week.

So that uncertainty led Colbert and his team to joke that Subway might actually be pulling a “Soylent Green” and feeding people around the globe processed human flesh. “The Late Show” produced a gag that was a fake Subway commercial and featured a pretty good deep-fake of Charlton Heston in his role as detective Frank Thorn in the award-winning 1973 science fiction film. The ad called Heston “Charles Weston,” but still, we get what they were spoofing. 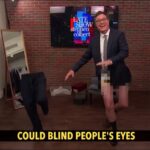 “At Subway, there’s been a lot of talk recently about whether or not Subway tuna sandwiches contain any real tuna,” the ad’s voice-over read as commercial-style close-ups of tuna sandwiches were shown. “Well after 55 years it’s finally time to come clean. Here’s our CEO Charles H. Weston.”

Then it cuts to the end of “Soylent Green” with a dubbed-over voice delivering maybe Heston’s most iconic line of all time, with a twist: “Subway tuna is made out of people!”

“Okay, you got us. Some of our sandwiches contain people. But for a limited time only, when you buy one footlong man sandwich, you get another one for 50% off. That’s a deal, regardless of what the filling is made of.”

Take a look at the clip below, and maybe consider sticking to homemade sandwiches for awhile.