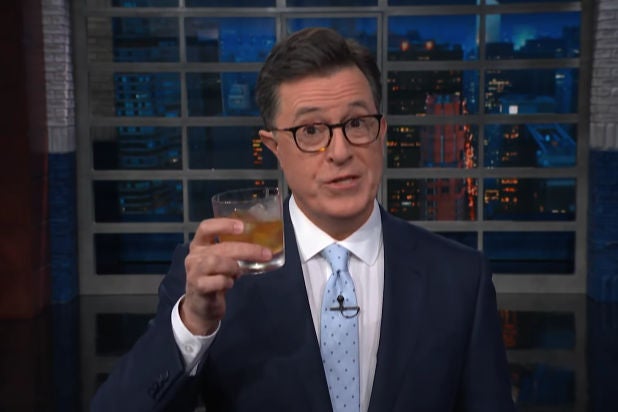 The last few weeks in the world of Donald Trump-related news have been wild, but they keep getting wilder what with Trump trying to ruin the government’s relationships with all its closest allies and then heading out to Singapore to spend quality time with North Korean dictator Kim Jong Un. As he did on his show Friday night as well, Stephen Colbert tried to make sense of this developing situation but, well, it’s hard.

You can watch Colbert’s monologue in the videos embedded at the bottom of this post.

“Now, demolishing our relationship with our closest ally might seem like a bad idea,” Colbert said during his monologue on “The Late Show” Monday night, referring to the conflict between Trump and Canadian Prime Minister Justin Trudeau. “But Trump’s top advisers think otherwise. Like Trump trade adviser and dehydrated Tommy Lee Jones, Peter Navarro.”

“The Late Show” then played a clip of Navarro saying: “There’s a special place in hell for any foreign leader that engages in bad-faith diplomacy with President Donald J. Trump.”

“So, Canada’s our enemy now,” Colbert continued. “In fact, according to the Washington Post, no U.S. officials have ever spoken this way about any U.S. ally, ever. These are the kind of words that normally precede military action. We’re going to war with Canada? Oh my god, we’re going to have to put Alex Trebek in a detention center. Bet you don’t have an answer for that one, do you, you smug bastard!

“And what makes this even crazier is that while he’s slapping around our allies, he’s stroking our enemies.”

Colbert then played the clip of Trump complaining about the G8 becoming the G7 after Russia was kicked out because, according to Trump, “Something happened a while ago, where Russia is no longer in. I think it would be an asset to have Russia back in.”

“Something happened? You mean the invasion of Crimea, eastern Ukraine, and the shooting down of a passenger jet? Did you just yada yada yada over war crimes?” Colbert asked, making a joke that Seth Meyers also dropped on NBC Monday night.

After noting that Trump kept lobbying for Russia to be allowed back into the alliance, Colbert made a plea.

“Mr. President, this really looks like Russia has something on you. What is it? Please tell me it’s something more than the pee-pee tape. Because this is Western democracy we’re talking about. This is the way the world ends: not with a bang, but with a trickle,” Colbert joked, before adding that important word he attaches to the end of every joke he makes about the pee tape.

Later on in the monologue, Colbert briefly touched on Trump’s summit with North Korean dictator Kim Jong Un, which didn’t happen until after the episode’s taping.

“We’re taping this before the summit happens. Supposedly, they’re going to meet one-on-one, or one-on-un, for about 45 minutes. Trump doesn’t even need that much time to tell if Kim is serious about denuclearization,” Colbert said, before playing a clip of Trump saying that he will know “in the first minute” because of “my touch, my feel, that’s what I do.”

“Oh, we know that’s what you do. When you’re a star, they let you do it,” Colbert said, referencing the “Access Hollywood” tape.

“So, what the hell is going on with Trump’s foreign policy? Well, The Atlantic’s Jeffrey Goldberg has been interviewing administration officials to see if they can describe a ‘Trump Doctrine.’ And one senior staffer summed it up as ‘no friends, no enemies,’ ” Colbert said. “Good news, we’re halfway there! And Trump doesn’t believe that the U.S. should be part of any alliance at all and that even though allies ‘expect a level of loyalty from us, he doesn’t believe that this should factor into the equation.’

“So no loyalty to any alliance. Particularly if he just met a younger, hotter alliance and the old alliance just had a baby. That joke, I remind you, is based on a true story.”

(In case you’ve forgotten in the madness of Trump’s America, the “true story” Colbert is referring to is how Trump had his Stormy Daniels affair shortly after Melania gave birth to his son Barron.)

Colbert then tied this whole thread together with quite a punchline.

“But perhaps the most succinct summation came from one Trump official who said the Trump Doctrine is, ‘We’re America, bitch.’ Huh, that’s weird because it really looks like ‘We’re Russia’s bitch.”

You can watch Colbert’s monologue in the pair of videos embedded below.