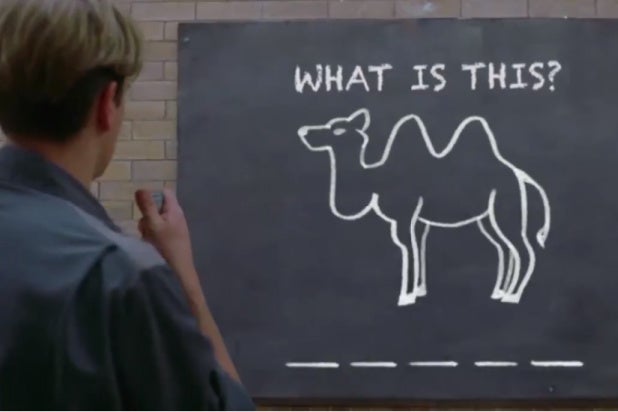 A new episode of “The Late Show With Stephen Colbert” opened with a skit that featured a pretty creative way to make fun of Donald Trump for being so proud of his results on a test designed to determine whether he’s cognitively impaired: by imagining what the movie “Good Will Hunting” would be like if Donald Trump was the main character instead of a secret math genius.

The topic of that test came up again this week during Chris Wallace’s interview with Trump for Fox News. When Trump brought it up for what must be at least the 20th time, Wallace commented that “it’s not the hardest test” — which in turn sparked another argument during what was already a surprisingly contentious interview.

Now, we are probably all familiar with the scene used by “The Late Show” here: Matt Damon is working as a janitor at MIT, and one night he solves some big math problem that had been left on a chalkboard for students to solve.

Also Read: Seth Meyers on Trump's Cognitive Test: 'Possible This Is the First Test He Ever Passed' (Video)

That’s when everybody realizes that this janitor is actually extremely smart, and maybe they should give him something to do at the school besides mopping floors. You can watch the real version of the scene here.

But Colbert’s version of the scene goes a bit differently. “The Late Show” took the actual scene from the movie, and the main changes it made was simply to what we see on the chalkboard. Instead of math stuff, on the board was simply a drawing of a camel, with the prompt: what is this? Watch below.

And in the version of the story, with Damon standing in for Trump, he does not solve the problem. Instead, he fills the chalkboard with guesses about what the animal is. Like “pony + two piles of dirt” and “a big dog smuggling hams.” He did not correctly guess that it was a camel.

This joke is a reference to a part of the test that Wallace mentioned during the Trump interview. Wallace said that one of the questions was just “What’s that?” along with a picture of an elephant.