Stephen Colbert went off on a pretty funny tangent during his opening monologue on Monday’s episode of “The Late Show,” in which he insisted in an exaggerated, over-the-top manner that sex parties can’t possibly exist… because he’s never been invited to one.

The joke was inspired by a Vice article called “The Sweaty, Sticky, Triumphant Return of Sex Parties,” which examines people who attend such events as things slowly begin to reopen after a year and a half of pandemic-forced shut-downs.

That’s when Colbert dug into the joke. “Really? Really? I’ve said this before, I just don’t buy that sex parties are actually a thing,” he said. “I’m in show business, supposedly the height of decadence, and I’ve never once been asked to a sex party.”

“No matter how many times I come on TV and say that they don’t exist. I’ve never been invited, or uninvited, or not invited to a sex party,” he continued. “No one’s ever said, ‘Hey Steve, missed you at the sex party last night. Too bad, you seem like the kind of person who would be really great to have a sex party, a real sex asset to the party.'” 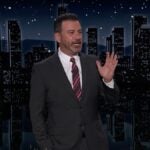 Then Colbert — who, it should be pointed out, is a devout Catholic who has been married since 1993, just so you know he’s kidding about all of this — ramped up the joke.

“Where’s my invitation? Are they in my junk email folder?” he said, before cracking up in a really fun way at the joke.

After taking a couple seconds to compose himself, Colbert added, “By which I mean the folder where I keep my junk’s email. Lilsteve@colbert.org.”

“That’s right, that’s right. My penis is a nonprofit.” Zing!

Colbert also joked about the logistics of hosting Zoom sex parties, and then linked the whole gag back to one of the fans in the audience — which resulted in a very fun moment that led Colbert to march off the stage for a second, filled with embarrassment. Then he joked about some of the other elements in that Vice article.

You can watch the whole monologue above. The bit we focused on begins approximately three minutes in.