“The Late Show” host Stephen Colbert tackled the crisis in Ukraine following Russia’s invasion in his monologue on Thursday night, attempting to find the humor in a serious situation.

Mostly, Colbert stuck to breaking down Russian President Vladimir Putin’s announcement over why his country was launching attacks on Ukraine, picking up on Putin’s comment they were trying to “De-Nazi-fy” Ukraine, and that Russia was trying to help people “subject to abuse and genocide by the Kyiv regime for eight years.”

He continued: “Now this is obviously a ridiculous claim. First of all [Ukrainian President] Zelensky’s not a Nazi. He’s from a Jewish background and he’s barely even a politician. He’s a former TV comedian. This is like if the U.S. invaded Canada to capture war criminal Eugene Levy. What I’m trying to say is the world is up ‘Schitt’s Creek.'” 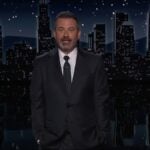 Also Read:
Kimmel Calls Trump ‘A Special Kind of Son of a Bitch’ for His Ukraine Stance and Putin Praise (Video)

During Putin’s speech, the Russian leader also warned the West not to get involved in the conflict, with a threat of strong retaliation.

“Something we’ve never experience?” Colbert said, using some of Putin’s words to set up his next joke. “He’s going to make a good Michael Bay movie?”