It’s probably not an exaggeration to say that Stephen Colbert and Sean Hannity are sort of longtime nemeses — the two of them have represented the opposing sides of opinion-based TV political media basically forever. So it’s not exactly surprising that Colbert would have himself a moment over the news that Hannity is a secret client of embattled Trump attorney Michael Cohen, and is thus tangibly tied to a huge criminal investigation.

Colbert’s “Late Show” monologue was a spectacle as a result, with Colbert even shouting out his former partner in crime, Jon Stewart.

“We already knew that Cohen represented Donald Trump and paid hush money to cover up his affairs, and last week it was revealed his second client was deputy RNC finance chair and Donald-Trump-flattened-out-by-a-rolling pin, Elliott Broidy.  Cohen helped Broidy pay $1.6 million in hush money after Broidy had an affair with a Playboy Playmate. And not the same Playboy Playmate that Donald Trump had an affair with. That’s two Playboy Playmates now. I’m just glad Hef isn’t alive to see his life’s work dragged through the filth like this,” Colbert joked before getting to the point.

Also Read: Jimmy Kimmel Goes All In on 'My Pal' Sean Hannity for Michael Cohen Reveal: 'That Sounds Normal' (Video)

Instead of saying that Hannity was Cohen’s secret client himself, he allowed a clip from CNN to explain, because, he said, they deserve it for all the mudslinging Hannity has done in their direction.

And after the clip, “The Late Show ” cut back to an empty stage — before panning to the left to find Colbert sprawled out like this in an easy chair with a glass of wine: 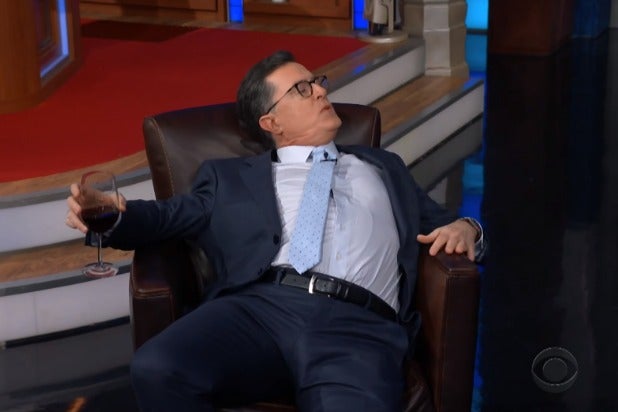 After a long moment, Colbert eventually stood back up and handed the glass to a stagehand. “How did I get this? I don’t know,” he joked.

“Jon Stewart, after the show, I’m going to come over and we’re just gonna spoon! Just spoon!,” Colbert exclaimed “This is crazy! Cohen only has two other clients and all he does for them is pay off mistresses. Which raises the obvious question: who did Sean Hannity have sex with?

“Now, we don’t know, and I can’t prove this, but I think it’s that football he’s always holding. Yeah, every commercial break, he’s got his hands all over it. Daddy wants some pigskin. We don’t know. we may never know. but it doesn’t matter what Cohen was doing for him. What does matter is that Sean Hannity is out there every day, every night defending Trump and Michael Cohen.”

Then they played a short montage of Hannity clips from last week in which he displayed palpable anger while ranting about overreach and the media “spinning out of control” after the FBI raided Cohen’s home and office.

“I gotta agree with Sean on this one — the media is spinning out of control. Did you hear about this guy on Fox News who’s defending Cohen without ever revealing he’s his lawyer, too? That’s crazy!” Colbert joked. He was so excited at this point that he struggled to get out his next line in a moment that appeared to be a genuine error rather than scripted. “That’s a pretty big d-d-d-d– it’s so crazy I can’t even say the words! It’s a pretty big d-d-d-d– It’s the wine, where’s the wine? I don’t know. Got stuck in my teeth there.”

Then Colbert finally got back on track.

“That’s a big detail to leave out, Sean. What else haven’t you been telling us? That you share a barber with the LEGO man?” Colbert asked. “How did Fox News let him go on the air with this massive conflict of interest? Did he not tell them? Or did he tell them and they just ignored it? I’m going to go with the first one because I know Sean Hannity, and ‘delivering factual information’ is not his strong suit.”

Colbert’s next joke at Hannity’s expense, meanwhile, took a surprising turn for a moment.

“This is my first reaction this afternoon when I first heard about it: I pity Sean Hannity,” Colbert said. “All this time he was defending Michael Cohen and Donald Trump so vociferously, maybe he wasn’t being a reflexive propagandist for a corrupt regime. Maybe he was just trying to protect himself. Here was a man who was about to be revealed. He was afraid the truth was gonna come out and destroy everything he built. He was frail and flawed and human. For the first time, I feel for Sean Hannity.”

To cure himself of this pity, Colbert then played an old clip of Hannity railing against Halloween as a liberal holiday, because it’s “teaching kids to knock on other people’s doors and ask for a handout.”

“Well, that didn’t last long,” Colbert said. “That did not last long. yeah.”

Also Read: Seth Meyers: Trump's New Strategy Is 'to Act So Guilty the Feds Will Think He Has to Be Innocent' (Video)

You can watch Colbert’s monologue from Monday’s edition of “The Late Show” in the video embedded at the top of this post.