Monday was an eventful evening in the world of politics — Donald Trump announced his new nominee to replace Justice Kennedy on the Supreme Court, and “The Late Show with Stephen Colbert” returned from hiatus to make fun of Trump after every single late-night show took last week off.

Colbert didn’t know that Trump picked Brett Kavanaugh when he taped the show since the taping was several hours before Trump’s primetime announcement. Instead, Colbert chose to express some doubt over whether Trump’s brain is up to the task of making a good decision.

That doubt wasn’t just general dissatisfaction with Trump — although that’s certainly a big part of it — but also Trump’s mind-shatteringly bizarre Elton John comment at a rally last week. You’ve probably seen the quote by now, but for those who haven’t, here you go. And, yes, this is 100 percent real.

Trump: “I have broken more Elton John records. He seems to have a lot of records. And I, by the way, I don’t have a musical instrument. I don’t have a guitar or an organ. No organ. Elton has an organ. And lots of other people helping. No, we’ve broken a lot of records. We’ve broken virtually every record. Because you know, look, I only need this space. They need much more room. For basketball, for hockey and all of the sports, they need a lot of room. We don’t need it. We have people in that space. So we break all of these records. Really, we do it without, like, the musical instruments. This is the only musical – the mouth. And hopefully the brain attached to the mouth, right? The brain. More important than the mouth is the brain. The brain is much more important.”

Colbert played the full clip on “The Late Show” Monday night, and you really should watch it because it’s somehow even weirder to see him actually say it than it is to read it.

Anyway, after the clip, Colbert came back with this quip:

Also Read: Colbert Has a Safe Place for Republicans to Dine in Peace: The Back of a Van (Video)

“And in a few hours, the brain that formed that sentence will be picking the next Supreme Court justice,” Colbert said, to groans from the audience. “And hey, hey, for no reason, remember when people were thinking Trump’s brain might be on the fritz but then his doctor Ronny Jackson said it wasn’t because Trump took a test where he successfully identified a camel? But then Dr. Ronny turned out to be a pill-popping dealer who drank on the job but we then never sent in another non-pill doctor to test Trump’s brain? Remember that?”

Colbert then decided that he wasn’t properly equipped to discuss Trump’s Elton John thing any further.

“Now we have to remember this is the president of the United States talking. And I, frankly, do not feel qualified to respond to his Elton John brain speech. So I have decided to bring in someone who’s more qualified in our new segment,” Colbert said, as he introduced “The Late Show’s Counterpoint From A Man Who Just Got Hit On The Head With A Sack Of Bricks.”

Then Colbert got into character by putting a big bandage on his head. 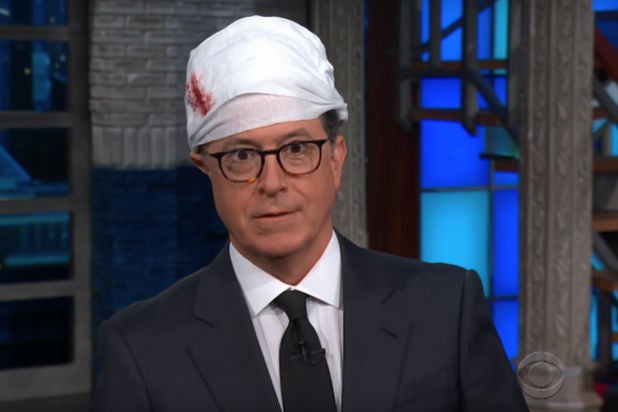 “Good evening, children. You know President Donald Turnip said a lot of good things on that loud place. Yes, the brain is the captain of the mouth but did he ever stop to consider that the hands don’t know what the eyes can see or hear? You know Shaquille O’Neal broke a lot of backboards but he had to use his arms and legs. I do it alone with no knees! No knees! And then there’s clouds. They’re big, they’re small, they rain, they snow — pick a lane! In concussion, there’s no way I could be the devil because I don’t see a ring on this finger. Now if you’ll excuse me, I have to go. I just found out that I am Trump’s Supreme Court nominee.”

You can watch this portion of Colbert’s monologue from Monday’s episode of “The Late Show” in the video embedded at the top of this post.