When President Trump went to Singapore to meet Kim Jong Un, nothing of note actually happened, and then when he returned home to the place where he’s still being investigated by special counsel Robert Mueller. That was the subject of the beginning of Stephen Colbert’s monologue on “The Late Show” Wednesday night.

“Donald Trump is back from his to face-to-face with Kim Jong Un, and that’s a lot of face. But now he’s got to deal with an even greater threat: Robert Mueller. And I’ll tell you all about it in tonight’s ‘Cohen Corner,'” Colbert said to begin his monologue.

“Tonight the ‘Corner’ is crowded because there is huge news in the Mueller investigation. Sources say that ex-Trump lawyer Michael Cohen is likely to cooperate with federal prosecutors. Yes, Michael Cohen is going to sing like a canary, which is ironic, because it’s Trump that looks like one,” Colbert joked, to extended applause and cheers from the audience.

Also Read: Kimmel Applauds Trump: 'It's Amazing What You Can Accomplish When You Just Make Stuff Up'

“The Late Show” then displayed this image: 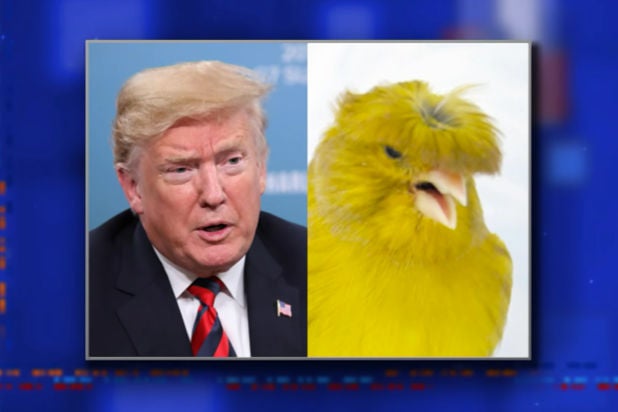 “Now, the first sign that Cohen is about to flip is that his lawyers are ‘not expected to work with him going forward’ and replacements for the lawyers have not been named. Hmm, he should hire my guest tonight, Michael Avenatti. I hear the last lawyer to go up against him is about to get arrested.”

That lawyer Colbert is referring to is, of course, Michael Cohen.

“One former White House official said even before the news that Cohen was cooperating broke, that ‘Trump should be super worried about Michael Cohen. If anyone can blow up Trump, it’s him.’ Well, okay, that gives Cohen leverage, because the last guy who threatened to blow up Trump got his own summit.”

Colbert here is, of course, referring to Kim Jong Un.

“Here’s the thing about Donald Trump. He only understands the rough stuff. You know Trump didn’t see this coming, because after Cohen’s office was raided back in April, he tweeted, ‘Michael is a businessman for his own account/lawyer who I have always liked and respected. Most people will flip if the Government lets them out of trouble, even if — ‘ dot, dot, dot, dot — ‘it means lying or making up stories. Sorry, I don’t see Michael doing that.” Sorry, I just heard he did.”

Colbert let that one sink in for a moment, and the crowd again broke into extended applause and cheers. Then he moved on with one more set of zingers.

“Now, there’s still hope for Trump. A person close to Cohen says he hasn’t flipped yet. ‘He’s sending up a smoke signal to Trump: I need help.’ And that smoke signal’s not a metaphor. Their pants are literally on fire,” Colbert said. “So the question is, will Donald Trump pardon Michael Cohen? Maybe, maybe not. Because sources say, ‘Trump has been fuming about Cohen in private, blaming him for the messy Stormy Daniels situation.’ “

Then Colbert clipped into his Trump impersonation for the punchline.

To wrap up this thread, “The Late Show” played a short video montage to memorialize Donald Trump’s friendship with Michael Cohen. You can see that and the rest of Colbert’s monologue from Wednesday’s episode in the video embedded at the top of this post.