Stephen Colbert ripped into judge Kathryn Mizelle in his Tuesday night monologue, breaking down her courtroom experience, or lack thereof, and dismantling the opinions in her ruling overturning the mask mandate.

“The genius jurist behind this ruling is judge Kathryn Mizelle, a 35-year-old appointed by the president after he lost the election,” Colbert said, referring to Donald Trump. “At the time, Mizelle received a ‘not qualified’ rating from the American Bar Association and had never tried a criminal or civil case. You do not want a judge with zero cases under her belt.”

He continued, putting on a different voice, “‘Council will approach the bench and explain to me what this tiny wooden hammer is for. Am I supposed to tenderize the jury?’”

Just before that portion of his monologue, Colbert took apart Mizelle’s decision to overturn the federal mask mandate. 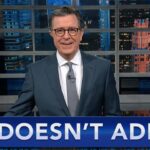 “This judge claimed that the CDC exceeded their legal authority by requiring masks, and that their power was limited to things like cleaning property not requiring people to take hygienic steps. Yes, you cannot force people to follow basic hygiene, you can only make them clean property. It explains the new bathroom sign: ‘Before returning to work, employees must wash this sign,'” he joked.

In his second take down, Colbert compared one of the points of her opinion to not using diapers on babies. Let him explain:

“The judge clarified her ruling explaining ‘wearing a mask cleans nothing. At most, it traps virus droplets.’ That’s the mask’s job, you dummy, so my droplets don’t get on you,” he said. “That’s like saying, ‘This diaper is useless. Everytime I put one on my baby, it fills up with poop! That’s not doing anything.’” 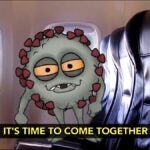