Donald Trump has finally managed to do something that has people so angry that the news cycle isn’t taking any breaks from it — and so, yes, Stephen Colbert spent a second night — a third time in the last four “Late Show” episodes — ripping the Trump administration for its policy of separating immigrant children from their families at the border and putting the kids in camps.

“You know, when it comes to the news, let’s face it, we don’t want to face it,” Colbert said to open his monologue Tuesday night. “Because once again, the big story is Trump’s policy of taking immigrant children from their parents at the border. Now, there are two ways to look at this story: either you can be horrified, or you can work for Donald Trump.

This was the picture “The Late Show” was showing when Colbert made that last crack: 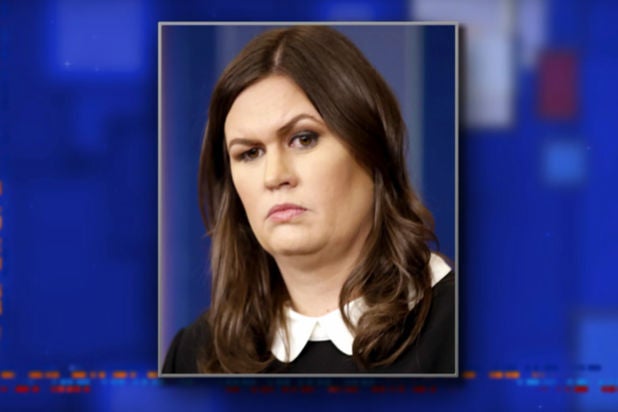 Then Colbert lectured Sanders for a moment about how she should probably just quit her job if she can’t bear to defend Trump’s troubling policies.

“Listen up. You don’t get to tag out here, Sarah, because it’s not really you up there. You’re just Donald Trump’s mouthpiece, or whatever part the lies come out of,” Colbert said.

“So, your administration owns locking up children, but if kids in cages is too much for you to defend, there is one option: you could resign. This is the White House, not an abandoned Walmart. You’re allowed to leave.

Then Colbert got back to Nielsen.

Also Read: Seth Meyers Figured Out an Easy Loophole to Get Rid of Trump (Video)

“Anyway, the press conference was no picnic for Kirstjen Nielsen, because according to Politico, last month, Nielsen had ‘concerns about the monitoring of unaccompanied children’ but changed her tune after senior administration officials pushed her to get on message over the weekend,” Colbert said. “So, for a brief moment, she had a little voice in her head telling her to do the right thing. So she had that little voice locked up in a cage in rural Texas.

“Even Nielsen’s close ally, White House chief of staff John Kelly, advised Nielsen against doing the news conference. Man! Does anybody in the White House listen to John Kelly? John Kelly is like that sticker on your med that says, ‘do not take with alcohol.’ ”

Colbert then mimed pulling the cork out of a wine bottle. “Well, now you’ve piqued my interest,” he said, before going in on Kelly.

“Now, Kelly wasn’t supposed to be an impotent toady. In fact, Kelly himself once believed he stood between Trump and chaos,” Colbert said. “But recently, ‘he has told at least one person close to him that he may as well let the president do what he wants, even if it leads to impeachment — at least this chapter of American history would come to a close.’ Okay, yeah. But that is the weakest thing I’ve ever heard. ‘Pack up your stuff, kids. The house belongs to the raccoons now.’

And can I see that last line again? ‘At least this chapter of American history would come to a close.’ That’s pretty optimistic that there will be history books after this. I believe this, the before times, will be remembered by shaman around the campfire.”

“And then the darkness came on the land and the great orange rising was not the sun! No! But the darkness and a tall man with a wide hat walked over the valley of the Potomac and all was ruined.”

You can watch Colbert’s monologue from Tuesday’s episode of “The Late Show” in the video embedded at the top of this post.