Stephen Colbert has been a bit more upbeat lately, probably because, for the moment, we’ve settled into a cycle of ordinary Donald Trump weirdness as opposed to the incessant bleakness of June and July.

And on Wednesday it was easy to tell why Colbert’s mood would have been elevated — the issues he kicked off his monologue on “The Late Show” with were Trump’s bizarre and desperate tweets of the day and Paul Manafort’s trial.

“Another day, another presidential tweet-nado. Get yourself down in the basement, because the tweet-nado is coming. And brace yourself — this one is about the Russia investigation,” Colbert began, before reading Trump’s tweet the went: “We have found the smocking gun about a campaign getting dirt on their opponent, it was Hillary Clinton.”

Colbert then mocked Trump’s typo by coming up with a new fake Trump tweet full of similar mistakes.

“Yes, we have found the smocking gun. it was not the trump champagne that was collaging with Russia. Crock-ed Hillary is the one guilty of that contusion. Switch Punt!” Colbert joked. “And this isn’t even the worst of Trump’s tweets today. This is: ‘This is a terrible situation and Attorney General Jeff Session should stop this Rigged Witch Hunt right now.’

“Donald Trump is telling his attorney general to shut down the investigation of Donald Trump. Rudy should tell him that just because he’s doing it in public, doesn’t mean it’s not obstruction of justice. Public urination is still urination. Allegedly. Allegedly. What’s his next tweet going to be? ‘Jeff Sessions should shut it down right now before Mueller sees this tweet and uses it as evidence against me. I can’t go to jail. I’m sweet meat. Space Force, take me away.'”

Also Read: Kimmel: Manafort's $15,000 Ostrich Jacket 'Should Be What He Has to Wear in Jail'

Then Colbert shifted to the Manafort situation.

“Trump’s freaking out this time because it’s day two of the trial of former Trump campaign manager and man undecided over which ostrich to wear, Paul Manafort. Now, it’s a tough time for Manafort, but one person has gone out of their way to be nice to him: the courtroom sketch artist. I’d say that’s a very flattering portrait,” Colbert said, as this image appeared on screen. 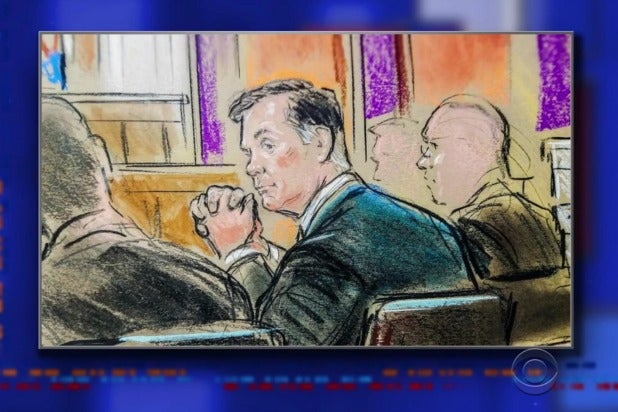 Then Colbert joked that “that’s just what he looks like on the outside. Here’s the sketch of his soul.” And then that sketch morphed into this image. 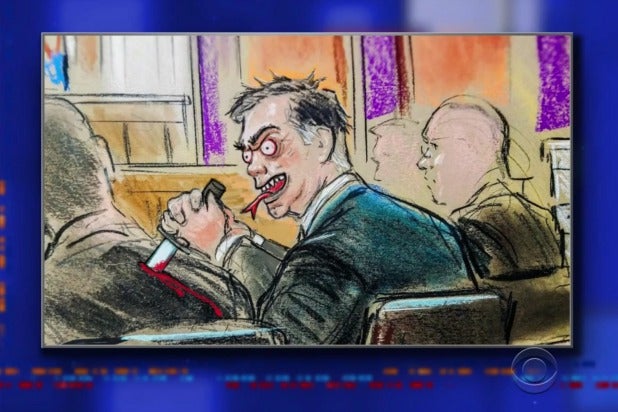 Then the camera cut to a view of of the “Late Show” audience, which chanted the name of the game: “Prison or Pardon!” Colbert then played host of said fictional game show for a moment.

“Okay, okay. Paul Manafort, for the pardon. Are you nervous? You should be. Okay. How much collusion was there, Paul? None, some, or ‘collusion is not a crime’? Would you like to phone a friend? Tough s—. They’re testifying against you,” Colbert joked.

“But it looks like Manafort’s not getting his pardon, in part because the trial isn’t televised, and according to one reporter, ‘If you’re playing for anything with President Trump, you almost have to appear on television.’ Yes, for Trump to care about you, you have to appear on TV. Which is why I’m pitching the new CBS series ‘Latino Toddler: Private Eye.’ ” 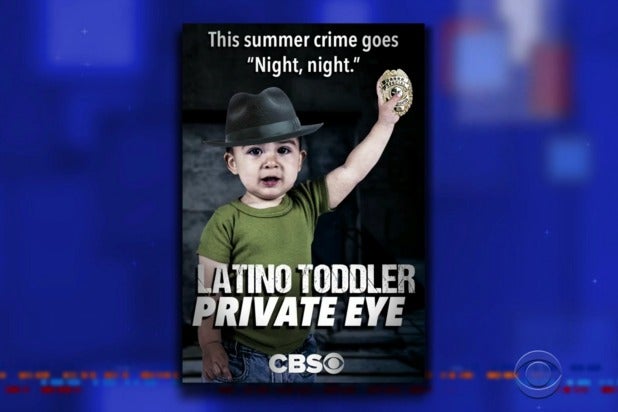 You can watch this portion of Colbert’s monologue from Wednesday’s episode of “The Late Show” in the video embedded at the top of this post.