The G7 summit has produced plenty of headlines, including those member countries’ commitment to support Ukraine, new sanctions against Russia and climate change discussions. But it was something else that piqued Stephen Colbert’s interest and made it into his “The Late Show” monologue on Thursday night — the weird banter about nude or shirtless world leaders.

Leaders like Britain’s Boris Johnson and Canada’s Justin Trudeau have made some odd remarks that, thanks to the world’s media, have attracted the attention of and responses from Russian president Vladimir Putin. Colbert saw an opportunity ripe for jokes.

“British Prime Minister Boris Johnson jested that G7 leaders could take their clothes off to show that ‘We’re tougher than Putin,’” Colbert recounted to his audience, setting up his first in a string of jokes on the topic.

“Oh my God, Boris. Stop trying to start parties,” Colbert said before trying on a posh English accent in an attempt to imitate Johnson. 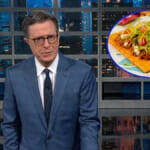 “Let’s all take our clothes off. It’s OK, it’s a work summit. Last one in the hot tub is a damn pasty. Come on Olaf, don’t you want to find out if the thatched roof matches the haystack?” Colbert said to laughs as he pointed to his head, and then to his groin.

The host then moved on to Trudeau, who responded to Johnson’s comment by joking that “Western leaders could try to match Putin’s naked torso pictures with a ‘bare-chested horseback riding display.’”

“Yes, because that’s how you show the Russians who’s boss. Who could forget the Potsdam Conference when Harry Truman intimidated Stalin with a nip-slip. Give ‘em hell, Harry!” Colbert said, flashing a photo onscreen showing showing President Harry Truman photoshopped to be revealing part of his chest in the historic image of him with Soviet Union leader Joseph Stalin.

Colbert then turned to Putin’s responses to the G7 members, which indicated the Russian leader was not amused.

“Today, Putin responded: ‘I don’t know how they wanted to get undressed, above or below the waist … But I think it would be a disgusting sight in any case.’ Below the waist – so Boris’ johnson?” Colbert said to raucous laughter from his in studio audience. 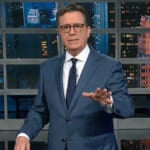 But even those who didn’t engage in the clothes-free debate were dragged into Colbert’s monologue.

“And I’ll have you know that many G7 leaders are very fit. Who doesn’t want to see Emmanuel Macron take his shirt off and then maybe that sweater he’s got on under that shirt,” Colbert quipped, showing a photo of the French leader with a few buttons on his shirt open and a Burt Reynolds–style chest of hair.

There’s more in his bit, which you can watch in the video above.