Arizona Senator Sinema and West Virginia Senator Manchin haven’t been in harmony with their party’s progressive wing on the terms of President Joe Biden’s “build back better” agenda. They also seemed to have aligned with each other’s views on the bill — until recently.

One interesting wrinkle was reported by Politico this week. Apparently the two, who have until now been fairly united on their efforts to make deep cuts to the proposed bill (total package price, and line items like paid family leave), are breaking up, so to speak. According to Politico, Sinema might actually be on board with the bill now — for real — while Manchin is not. 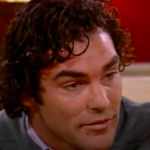 Politico’s report inspired Colbert’s cold open gag, which uses the footage of Noah (Ryan Gosling) and Allie (Rachel McAdams) arguing about their future while on a boat, but superimposes Sinema and Manchin’s faces on the characters. The conversation pretty much goes like it did in the hit 2004 movie — until Manchin keeps asking Sinema what she wants. The boat goes over a waterfall and Sinema screams that she wants “attention.”