Stephen Colbert was in an unusually jovial mood on “The Late Show” Tuesday night, because for a brief moment, at least, things aren’t looking extremely great for Donald Trump. That’s due in large part that the trial of Trump’s campaign manager, Paul Manafort, is underway. Given that situation, Colbert found Trump’s usual refrain of “no collusion” to be more amusing than it usually is.

“One person who’s apparently not worried about Mueller’s investigation is Donald Trump,” Colbert said during his monologue Tuesday night. “For over a year now, his catchphrase has been, ‘no collusion.’ ”

Then, “The Late Show” played a quick montage of various times Trump has declared “No collusion” and “No collusion, no nothing” on TV, before slinging his jokes about it.

“He uses it for every occasion. It’s like his ‘aloha.’ It means both ‘hello’ and ‘I’m guilty,’ aloha. Aloha!” Colbert joked. “But he and his team have recently re-branded and are using a new phrase that Trump tweeted out this morning: “Collusion is not a crime, but that doesn’t matter because there was No Collusion (except by Crooked Hillary and the Democrats)!”

“Okay, so collusion isn’t a crime, but it doesn’t matter, because he didn’t do it anyway — Hillary did.”

This weird rhetoric, Colbert explained, presents a sort of logical conundrum for Trump fans, who like to chant “Lock her up!” because if collusion isn’t a crime then they can’t lock her up for it. So they will have to, Colbert joked, change that chant.

“It’s really going to complicate the chants at his rallies. ‘Lock her up! But collusion’s not a crime, so what are we locking her up for? I am confused! We’re living in a web of lies! Woo! Woo!’ ” Colbert joked. “But Trump is right about one thing: there is no law against collusion. Technically, it’s called, ‘conspiracy to commit an offense against the United States.’ Oh, he’s offended the United States already. They oughtta arrest him for groping the American flag.”

Then “The Late Show” presented this image on screen. 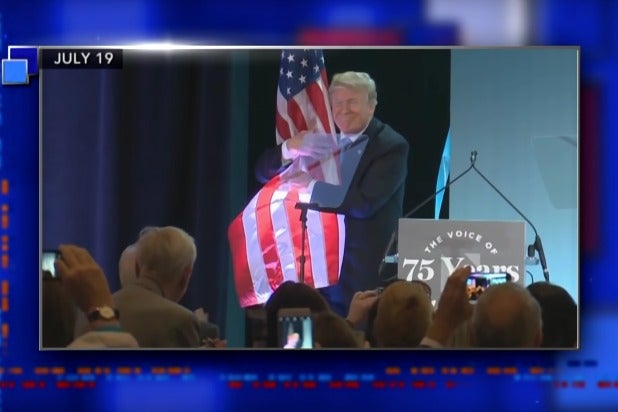 You can watch this portion of Colbert’s monologue from Tuesday’s episode of “The Late Show” in the video embedded at the top of this post.