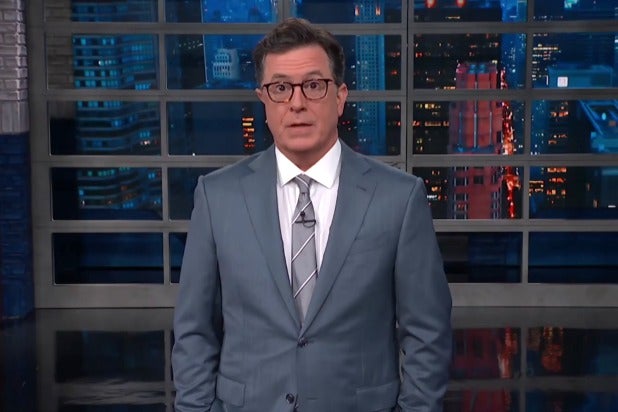 Stephen Colbert’s tone on “The Late Show” has slowly evolved this year as the host has begun to adopt a somewhat more desperate tone the further we get into Donald Trump’s tenure as president. And his monologue on Monday reflected that, as he began by thanking the audience for its cheers when he came on stage.

“Thank you for that. I need that tonight in ways I don’t always need it because today has shaken me to my core,” Colbert said. “And I don’t think I need to point out that, at 54, there’s not a lot of core left. It’s a nice suit. It gives me the illusion of core.

“Before we get into whether our president is the Siberian Candidate, I’d like take a moment right now to remind you of something Lincoln said: ‘America will never be destroyed from the outside. If we falter and lose our freedoms, it will be because we destroyed ourselves.’ And: ‘A house divided against itself cannot stand.’ They were his two most famous tweets. So, with that in mind, I’m thinking that maybe in the interest of unity, the most patriotic thing we can do right now is not pointing out the alarming behavior of our president, but instead just shut up and take it until he’s gone. Does anybody feel like taking it?”

In response to the question, the “Late Show” audience shouted in unison: “No!”

From there, Colbert embarked on a two-part monologue discussing this whole situation — beginning with ten minutes before the show’s first commercial break and then continuing after they returned for a bonus portion of monologue. You can find videos of both portions embedded at the bottom of the post.

Trump: “I have President Putin. He just said it’s not Russia. I will say this. I don’t see any reason why it would be.”

“You don’t see any reason?” Colbert asked. “Do you own a mirror?”

Later, Colbert cracked some jokes about the oft-suggested idea that all this is happening because Putin is blackmailing Trump somehow.

“If Trump’s spineless toadying to Putin made you think, ‘What’s Vlad got on him?’ You’re not the only one,” Colbert said, before playing the clip from Trump’s press conference with Putin in which a reporter asked Putin: “Does the Russian government have any compromising material on President Trump or his family?”

Putin’s response, in the clip “The Late Show” showed, consisted only of a chuckled, Which led Colbert to role play as Putin for a moment.

” ‘I’m sorry, I was just remembering funny video I saw of Mr. Trump. I don’t want to say what was on video but, uh… it was pee-pee tape. Next question. Who wants to die next?’ But Putin does know exactly where and when he didn’t get the material he for-sure doesn’t have.” Colbert said.

In the next clip we got Putin’s verbal response to the previous question, though the translator: “I treated President Trump with utmost respect, but back then, when he was a private individual, a businessman, nobody informed me that he was in Moscow. Let’s take St. Petersburg economic forum, for instance. There were over 500 American businessmen — the high-ranking level ones I don’t even remember the last names of each and every one of them. Do you think that we tried to collect compromising material on each and every single one of them?”

Colbert responded to that clip with a story of his own from his trip to Russia last year, when he stayed in the same hotel room Donald Trump was in when the alleged events of the pee tape occurred.

“Yeah! Yeah, I do! When I was in Russia, and this is true, I was followed everywhere I went, and I’m a comedian,” Colbert said. “I was informed by our security people in no uncertain terms that my phone was bugged and my room had cameras in it. So I showered in a blue blazer. When I finally — I had to get naked eventually, and this is true, I turned to every mirror and said, ‘You like, Ivan? You like?’ “

You can watch the two parts of Colbert’s extended monologue from Monday’s episode of “The Late Show” in the videos embedded below.