The Donald Trump-Vladimir Putin news train kept going at full speed on Tuesday as Trump tried to convince people that he misspoke when he said in front of Putin and the world that he didn’t think he had any reason to believe Russia tried to influence the 2016 election. And, likewise, Stephen Colbert kept pace with his monologue on “The Late Show” Tuesday night.

“One day after his disastrous summit with Vladimir Putin, it’s starting to dawn on some people: Trump may be a bad president,” Colbert said. “Even Trump officials are embarrassed by his Putin show. Now they’re embarrassed? ‘I was with him with the Nazis and imprisoning children, but siding with the Russkies? They killed Apollo Creed! Wolverines! Wolverines! Different movie but similar idea!’

“Now, right after the summit, Trump thought he did great. Until he got on Air Force One and ‘his mood grew foul as the breadth of the critical reactions became clear.’ ‘Look, look, don’t worry about these clowns, that’s fake news. Turn on Fox. Gah!’ ”

Also Read: Kimmel: 'I Would Rather We Had a Chimpanzee As President' Instead of Trump (Video)

Colbert then discussed how we got from there to Trump’s would/wouldn’t “clarification” on Tuesday.

“And, apparently, aides steered clear of the front of the plane to avoid being tapped for a venting session with Trump,” Colbert said before role-playing as Air Force One’s pilot. ” ‘Attention passengers, this is your pilot speaking. You’re gonna wanna fasten your seat belts because no one’s flying this plane. I am not going up there.’ So, this afternoon, Trump went into emergency spin mode and summoned Republican leaders to the White House to watch his induction into the Lying Hall of Fame.”

From there, Colbert began going through Trump’s comments, starting with the moment when he tried to express his faith in the American intelligence apparatus and the lights turned out in the middle of the remark. Then Colbert had some jokes about the part where Trump tried to say that he agreed with the U.S. intelligence community before confessing that he really just can’t commit to that line of thought.

Trump: “I accept our intelligence community’s conclusion that Russia’s meddling in the 2016 election took place. Could be other people also. There’s a lot of people out there.”

“No! You shanked even that! You either accept it was Russia or say it could be other people,” Colbert said. “You can’t do both! ‘I, Donald, take you, Melania, to be my lawfully-wedded wife. Although I could take other people too, there’s a lot of people out there.’ You know, he should issue a wanted poster. ‘Wanted for hacking the 2016 election: Russia, somebody else, or everybody else.’ ” 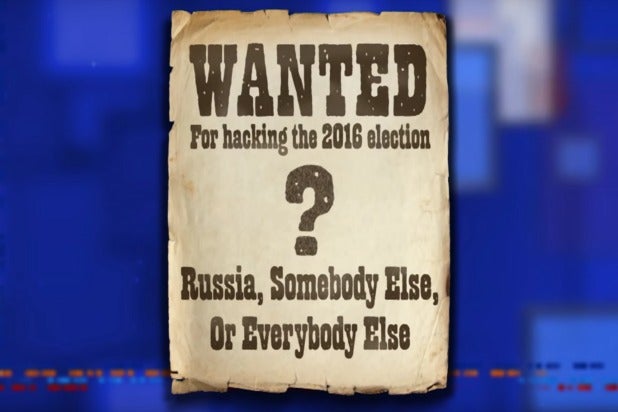 Eventually, Colbert got to the part where Trump said that one part of his comments required “clarification.”

“All right, Mr. President, I’ll bite. Let’s see how dumb you think the American people are,” Colbert said, before “The Late Show” played the fateful clip.

Trump: “In a key sentence in my remarks, I said the word ‘would’ instead of ‘wouldn’t.’ The sentence should have been ‘I don’t see any reason why I wouldn’t — or why it wouldn’t be Russia.”

“Yes, the sentence should have been that. It was not that,” Colbert quipped. “But then again, who among us hasn’t said the exact opposite of what he just said in front of cameras on multiple occasions? I’m sorry, let me clarify. That sentence should be, ‘Who among us has not not done that.’ ”

Colbert then suggested a couple other revisions Trump ought to try, including with the “Access Hollywood” tape.

“If you can just add a new word in, what’s next?” Colbert asked. ” ‘After Charlottesville, I meant to say there’s bad people on both sides. And also on that bus, I meant to say ‘respect her by the p—-.’ ”

You can watch Colbert’s monologue from Tuesday’s episode of “The Late Show” in the video embedded at the top of this post.