It may be hard to believe given the weird way time works in Trump’s America, but Thursday marks the one-year anniversary of special counsel Robert Mueller’s investigation into all things Donald Trump. Stephen Colbert spent a chunk of his monologue on “The Late Show” Wednesday night celebrating that fact and checking in on how things are going with the Trump camp.

“The first is anniversary is typically the paper anniversary, and with any luck, that is is what Mueller is going to be serving Donald Trump with,” Colbert said near the beginning of the monologue. “A grand jury has been impaneled in Washington, and by law, it has to be a jury of Donald Trump’s peers, so it’s Sean Hannity, the cast of ‘Shark Tank,’ and a cheeseburger. You are what you eat.”

Then Colbert checked in on what’s going on with Trump himself.

“Meanwhile, way on the other side of town, the president himself is freaking out. According to one confidant, Trump complains about the FBI raid of Michael Cohen’s office ’20 times a day.’ They’ve actually put it on his schedule as ‘b—-ing on the ones,’ ” Colbert joked. “Traffic on the twos. B—-ing on the ones. Now, a lot of people say that Trump’s attacks on the investigation make him look guilty, but one Trump associate explains, ‘No. this is Donald Trump’s personality. He just has to respond. He’s been so emotional… it takes a toll on him, and the way he deals with it is to lash out.’ ”

That, Colbert then noted, is perhaps not the most comforting way to frame this situation.

“Yes, yes. Reassuring words about the man with the nuclear launch codes. ‘Sleep tight, honey. Everything’s going to be okay as long as nothing upsets Donald Trump. We dance on the edge of a knife.’

From there, it was time to look at what Trump’s strategy for dealing with Mueller seems to be — and, unsurprisingly, it’s a strategy that has more to do with fighting public perception than the investigation itself.

“Trump also complains that ‘he needs better ‘TV lawyers’ to defend him on cable news.’ ‘Jared, get me Matlock on the phone. What’s that? He’s dead and never really existed? That’s a mystery. Get me Mrs. Murder, She Wrote! Get me Colombo.’ And who does Trump think is a TV lawyer upgrade? Former New York mayor Rudy Giuliani, seen here in a community theater production of ‘Nosferatu,’ ” Colbert joked as this image appeared on screen. 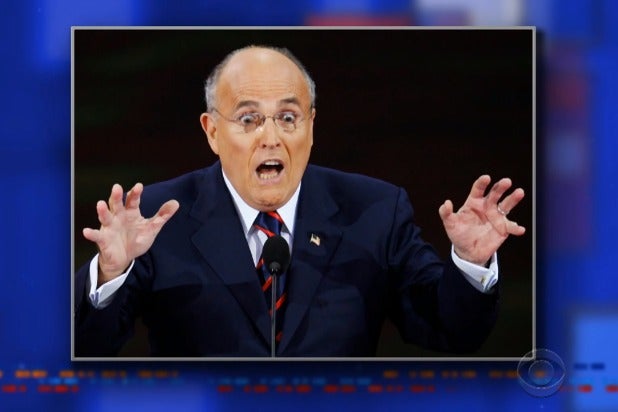 “Giuliani says he and Trump are in lockstep on strategy. In fact, he says of his relationship with Trump, ‘We’re on the same wavelength.’ Yes, they’re so close, it’s like they finish each other’s prison sentences,” Colbert continued. “But despite this defiant tone, the White House is prepared to ride out the Mueller investigation. As one White House staffer put it, ‘Everyone seems resigned to just buckle up and get through whatever we’ve got to get through for it to reach its conclusion.’ Yes, buckle up, because what you have to get through is gonna feel like this.”

“The Late Show” then played a clip of a car driving over the side of a cliff.

“I’m so glad they were wearing seatbelts. We checked, they’re fine, right? They’re telling me they’re totally fine. A little stiff in the shoulders when it’s cold. But some people in the administration are already looking towards the future because President Trump’s campaign aides are quietly launching his re-election campaign,” Colbert said, a comment which drew boos from the audience.

“Yes, yes. But why would you launch it quietly? Don’t you want people to know? That’s like quietly launching a search party.”

You can watch the political portion of Colbert’s monologue in the video embedded at the top of this post.