On Friday night, Stephen Colbert took a break from discussing the biggest moral scandal of the Trump administration so far and instead took aim at a different Trump scandal — the Paul Manafort thing.

“It’s the end of another jam-packed week in America, and we’re really only talking about one story. It’s the sad one down south,” Colbert said at the beginning of his “Late Show” monologue Friday, referring to President Trump’s policy about separating immigrant children from their families at the border.

“But other things happened in the last week. For instance, Robert Mueller is locking people up. I’ll catch you up on the latest on tonight’s Russian Roundup.”

Colbert joked about several figures who are factoring into the Russia investigation, starting with Paul Manafort.

“There’s trouble for former Trump campaign chairman and zombie Corleone, Paul Manafort, because last week a judge revoked Manafort’s bail and sent him to jail to await trial,” Colbert said. “But he’s got a strategy. He’s gonna find the meanest-looking guy in the prison yard, walk right up, and help him run for president. This is a big deal. Manafort was Trump’s campaign manager all the way to the convention. If they were any closer, they’d be wearing one long tie.”

With that, this image appeared on screen: 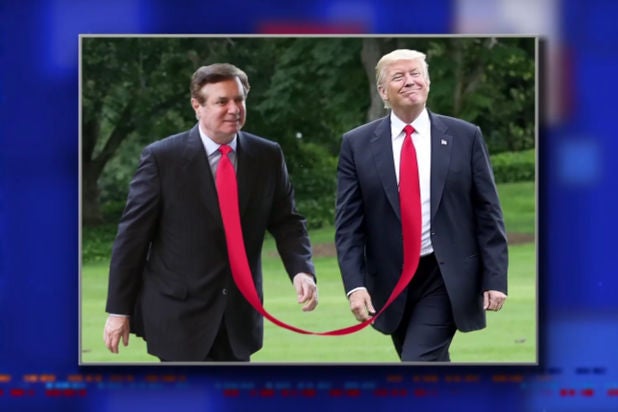 “It’s umbilical. But now that his old campaign chairman and chief strategist is going to the Big House, Trump remembers their relationship a little differently.”

Also Read: Seth Meyers Compares Trump to Jr Smith: 'You Have No Idea What's Going on and You Think You're Winning When You're Not'

“The Late Show” played a clip from last week in which Trump downplayed his connection to Manafort, trying to claim that Manafort was his campaign manager for only “49 days or something.”

“Or something?” Colbert asked. “If ‘something’ means five months — ‘Paul Manafort? Hardly knew him. Brought me coffee, ran my campaign for 150 days. What’s his name again? Fat Manatee?'” Colbert said in his best Trump impression.

If he’s found guilty, Manafort faces 305 years in prison. “I think that’s harsh,” Colbert said. “305 years? I think by year 300, the guy has learned his lesson. But with that sort of jail sentence hanging over him, everyone is wondering how Manafort will hold up under questioning.”

“Mr. President, run,” Colbert joked before going in on another notorious person related to Trump.

“And another Trump associate has admitted to collusion. This time, it’s Trump friend and bizarro Harry Potter, Roger Stone,” Colbert said. “Recently, Stone revealed a new contact with a Russian national during the 2016 campaign, bringing the new total to at least 11 Trump associates or campaign officials who have acknowledged interactions with a Russian. But, hey, who’s counting?”

Turning to another camera, Colbert said, “Robert Mueller is.”

Also Read: Colbert: Trump's Executive Order 'Is Not What He Wants You to Think It Is' (Video)

You can watch this portion of the monologue from Friday night’s episode of “The Late Show With Stephen Colbert in the video embedded at the top of this post.