By the standards of this exceptionally tumultuous week for the government and President Donald Trump in particular, the material Stephen Colbert had to work with for his monologue on “The Late Show” Friday night was pretty chill. But Colbert delivered despite the relative mundanity, bringing out an Eric Trump impersonation that will blow your mind when you see it.

That impression came up because Colbert was discussing the prospect of the Trump sons, Donald Jr. and Eric, trying to help out Republicans in the midterm elections this year. You can see the impression for yourself in the video up top.

“Just a quick programming note, a reminder: Sunday is Mother’s Day. Or as Mike Pence called it, ‘Karen’s Day,’ ” Colbert joked, referring to how Pence refer to his wife, Karen, as “mother.”

Also Read: Colbert: If Post Offices Are Forced to Put Up Pictures of Trump and Pence, They Should Be the Size of a Stamp (Video)

“We’re also less than six months away from the 2018 midterm elections, when Democrats are hoping to take back the House and possibly even the Senate. But — and it’s a big ‘but’ — but Republicans are deploying their secret weapon: Trump son and reason to leave the bar, Donald Trump Jr. DJT Jr. is planning to help Republican candidates this summer by taking on a big role in the midterms, which means he’s going to have to take some serious time off from… ” Colbert trailed off, a quizzical expression on his face as he realized he didn’t know what Donald Jr. actually does.

“What does he do? What does he do? He’s a suit filler? A hair-gel storage locker? I’m not sure what he does. But Don Jr. has already started helping, because a couple weeks ago, he hosted a secret fundraiser for Vice President Mike Pence’s older brother, Greg Pence, who is running for Congress in Indiana. That’s an exciting double bill if you love Trump/Pence and don’t care which ones.”

It was at this point when Colbert’s impression of Eric Trump came out.

“I can’t wait to find out how his brother Eric helps with the mid-terms,” Colbert said, as he wiped his upper row of teeth with his hand and tucked his lip like so: 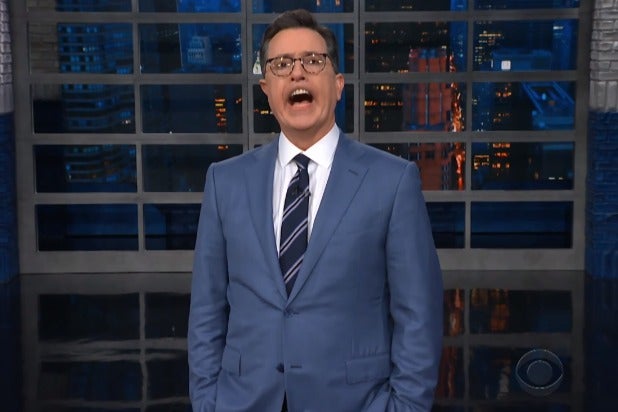 Then Colbert got in character.

You can see Colbert’s Eric Trump impression for yourself in the video at the top of this post.