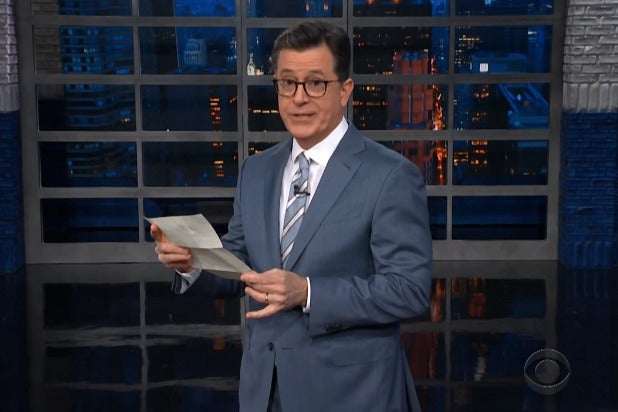 Last week was a relatively quiet one for the always-tumultuous Trump administration — or maybe it just seemed that way because I was so focused on “Avengers: Infinity War” all week. But we’ve had a pretty sharp turn back to the chaotic normalcy of 2018 since Saturday night. Which means Stephen Colbert had a pile of topics to make jokes about on “The Late Show” Tuesday night.

Among those topics were the questions that special counsel Robert Mueller wants to ask Donald Trump — questions that were leaked to The New York Times on Monday and had everyone in a tizzy.

“I don’t know about you, but I’ve got a lot of things I’d ask Donald Trump, and now I know Robert Mueller does, too. because the succeedin’ New York Times has gotten their hands on all the questions that Robert Mueller wants to ask President Trump,” Colbert said. “Oh, come on! Don’t print them. If Trump sees the questions in advance, he’ll cheat! ‘Did I collude with the Russians? Well, obviously, I…. did not. Is that what we’re looking for?’ “

Colbert then took aim at the discussion over where the leaked questions actually came from.

“Apparently, in the beginning of March, Mueller’s team called Trump’s lawyers to give them a preview of the questions. The lawyers took notes, and then somehow those notes wound up at The New York Times,” Colbert said, before noting the chief reason why it’s likely that Trump’s own people leaked the questions. “Trump wants to pin the blame on Mueller, but Mueller’s former assistant says grammatical errors in the document prove that the leaked questions came from the trump white house. the yeah, they weren’t quite right.”

At which point Jon Baptiste chimed in: “They can’t spell,” a sentiment that prompted applause from the audience.

“There’s something about the way the questions were written that seems suspicious,” Colbert continued, before slipping in a Melania joke. “One hint was question five, which said, ‘Is Trump be colluder? Also this Melania, please help!’

Also Read: Colbert Has a Memo for Trump: 'Just Because Somebody Is Talking on Your TV, It Doesn't Mean They're Talking to You!' (Video)

“But Trump is furious about this leak. This morning, he tweeted, ‘So disgraceful that the questions concerning the Russian Witch Hunt were ‘leaked’ to the media. No questions on Collusion. Oh, I see…you have a made-up, phony crime, Collusion, that never existed, and an investigation begun with illegally leaked classified information. Nice!’ Did the president just use the word ‘nice’ sarcastically? Smart. But he didn’t stop there. He tweeted: ‘It would seem hard to obstruct justice for a crime that never happened.’ It would seem hard, but you make it look easy.”

Then Colbert supplied some extra questions of his own for Mueller to ask Trump.

“Now, I’ve read the 49 questions that Mueller has for Trump, and they barely scratch the surface of what I want to know. So I’d like to submit some additional questions for Mueller to ask the president. Question 50: Did you do it? Question 51: But, really, though, did you? Question 52: Would you rather fight one Robert Mueller-sized horse or 100 duck-sized Robert Muellers? And question 53: Michael has 130,000 apples, and Stormy has zero apples. if Michael gives Stormy 130,000 apples, why would he do that if you hadn’t had sex with her?”

You can watch all of Colbert’s monologue from Tuesday’s episode of “The Late Show” in the videos embedded below.